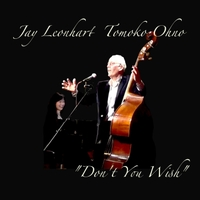 After experimenting with other instruments, a phase described in the title track, "Don't You Wish," Jay Leonhart locked onto the bass at the age of 13. Later inspired and mentored by the legendary Ray Brown, he began his stellar career which included playing with icons Duke Ellington, Judy Garland, Buddy Rich, Sarah Vaughan, Mel Torme, and Tony Bennett. Leonhart has also anchored well-known trios and led his own, honing his solid reputation as an exceptionally gifted and versatile musician.

In the 1980s, Leonhart added another facet to his versatility. When his children were small and he discovered the "little ditties" on Sesame Street, he started writing his own; applying his formidable intellect, endless curiosity, and witty perceptions to a wide range of human events and dilemmas, he has produced over 100 songs.

That's how you end up with a wildly diverse collection like "Don't You Wish," his 2018 release with the marvellous pianist Tomoko Ohno. Here we learn about being dazzled by bunnies ("The Playboy Club"), almost missing a gig with Torme ("Curtains"), the down side of jazz clubs ("Change My Occupation"), the collapse of the Dutch economy ("Tulips"), and alien abduction ("They're Coming to Get Me").

At this point, it must be said that Leonhart is no Vic Damone, but his voice is a strong, pitch-perfect vehicle for delivering his stories, and whatever he sings, swings. Moreover, his ear is so good that he can add wordless tenths over the notes of his solos. In fact, Leonhart has been called "the Fred Astaire of jazz" because he is so smooth, you may forget how good he is.

It's also possible that he has found his ideal musical partner in Ohno, whose elegant playing and close listening complement every song. All whimsy aside, the duo's virtuosity reminds listeners that what they're hearing is jazz. The difference is that they may grin all the way through it.