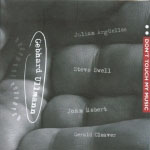 When Gebhard Ullmann took his Basement Research into Krakow 's Alchemia Club to celebrate his 50th birthday, he recorded two sets of music. The first was released as Don't Touch My Music, Vol. 1. Like the first, this second set is unedited and unchanged, and shows just how intuitive and empathic the band is.

Ullmann's compositions encapsulate several idioms. He goes from blues to a march, transforming into free idioms without a twinge. And just as his writing is earthy, so too is his playing. He never wastes a note and creates music that leaves its mark on the anvil of time. And if his playing is the cornerstone of the band, his accomplices are no less distinguished in essaying their craft.

Ullmann fires up "Das Blaue Viertle" from a funereal beat into a hot and grinding climax. Along the way, he has Julian Arguelles (soprano and baritone saxophones) and Steve Swell (trombone) help in the transition. The deep growl of the baritone and the wailing cry of the trombone are muscular trajectories, but a waft of swing that cools the air, and the silken curtain that Swell and Arguelles drop behind Ullman, brings their vision full circle.

"New No Ness" takes concept and resolution to another level. In an elegiac encounter, John Hebert (bass) and Gerald Cleaver (drums) are cool protagonists holding a conversation in almost hushed voices. Their path is unhurried as the bass gives voice to a soft shower of chords tempered by the rhythm of the drums. The mood is rent asunder by the invasion of the brass. Shards fly, volatile darts criss-cross, tumultuous lines leap, and the energy is intense. The phases are distinct but just as the calm tells its own story, the storm sets up its own pitch.

In the exquisitely delightful nugget "Don't Touch Our Music," Ullmann, Arguelles and Swell set out on individual roads, marking their journey with breathy phrases, tongue-slapped interjections and quaint melodic lines that disappear almost as soon as they come in. They stop for brief conversations and then traipse off again. It is all quiet and the curtain ringer for a performance that should stay long in the memory.