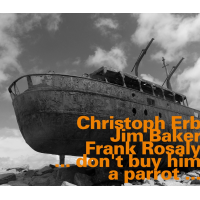 Swiss reedman Christoph Erb has a thing about the Windy City. He first visited in 2011 and discovered fertile ground for collaborations, affirmed by the 14 Chicago-centric releases on his own Veto imprint. Among those hookups is the trio here with pianist Jim Baker and drummer Frank Rosaly, which is also responsible for Parrots Paradise (Veto Records, 2017). In instrumentation they recall both Cecil Taylor's seminal '60s Unit as well as the still extant Alexander von Schlippenbach Trio. And they adopt a similar freely expressed seat of the pants navigational style, triangulating a cooperative path through the four cuts, which sound like selections from longer pieces.

It's the latter outfit which provides the most obvious reference point, reinforced by echoes of iconoclastic reedman Evan Parker in the way Erb's series of clipped choked phrases on tenor saxophone run together into thickly voiced lines. That's particularly striking on the title track but also recurs later in the program. In another resemblance, a strong collective ethos is apparent from the outset in the almost continuous three way interaction, although this does have the tendency to cast Baker's scrabbles and crabwise motion in a more supportive role.

"(parrot, figuring...)" begins with dialogue between squiggling piano figures and light airy tenor, before Baker extends into energetic runs of evenly articulated notes which position him as a distant cousin of Cecil Taylor. As elsewhere, Rosaly organizes percussive textures and colors into a loosely shaped momentum which doesn't constrain where the communal will might take them. Here it takes them into a dense choppiness, until the drums and saxophone subside to leave the pianist alone at the close.

"for canaries, career opportunities in the mining industry" offers a change of tack as Erb wields breathy bass clarinet over Baker's spare harmonic framework and suggests some half-remembered standard. But as the reedman's keening cry meshes with dramatic piano flourishes and Rosaly's rumbling tattoo, they revert to the angular pulsing dash which serves them so well and constitutes this band's dominant characteristic.

...don't buy him a parrot...; (parrot, figuring...); for canaries, career opportunities in the mining industry; "It isn't hard to follow a man who carries a bird cage with him wherever he goes...".