By Karl Ackermann
September 13, 2017
Sign in to view read count 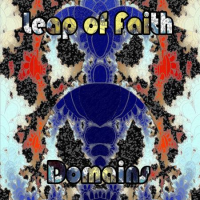 In 2009, David Peck's (PEK) Leap of Faith group reconvened after a lengthy hiatus to become a prolific producer of music that is always far outside the box. His Evil Clown label has flourished with a company of like-minded artists working in a collective environment. Leap of Faith has performed and recorded in formations ranging from trio through full orchestra, all challenging conventional beliefs and preconceived ideas about composing and performing. In their various manifestations, Leap of Faith have released more than seventy albums. With Domains the group continues to further the process of collective improvisation, or as PEK prefers to call it, "pure improvisation."

Performing as a quintet on this release, reed player and composer PEK is joined by regulars, cellist Glynis Lomon and drummer Yuri Zbitnov. A frequent contributor of late, bassist Silvain Castellano is on board as well as new addition—and a second bassist— Damon Smith. Smith, in addition to leading his own formations, has played with Vinny Golia, Joe Morris and Weasel Walter. He recorded an untitled free improvisation release with trumpeter Peter Evans in 2008 (ugEXPLODE).

While the gadgetry of past LOF releases are still close at hand (crank, sirens, rachet, etc.), Domains has a very different sound by comparison. The various contraptions that PEK favors are largely relegated to the background. Instead, the single, title track album is greatly impacted by Lomon, Castellano and Smith hovering in the lower ranges of their instruments. The net effect is that Domains has an ambient drone quality throughout much of its seventy-minute core. On either side there is an opposite high end, either from Lomon's cello or PEK's reeds, but the bottom dominates here.

As a guest performer, Smith adds a feature that LOF demonstrated on Solution Concepts (Evil Clown, 2015), where Thomas Heberer played cornet on two tracks. Guest musicians are used in a way that plays to their strengths, tweaking the process just a bit, but without compromising the unique vision of PEK. The music remains challenging and intelligent but perhaps more accessible, and it is the best Leap of Faith album to date.

About Leap of Faith