Home » Jazz Articles » Nightcrawlers: Do You Know A Good Thing?

Nightcrawlers: Do You Know A Good Thing? 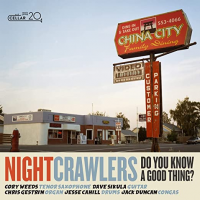 A nightcrawler is defined as a member of a fictional subspecies who are born with superhuman abilities. It is hard to imagine this is the definition tenor saxophonist Cory Weeds had in mind when he brought this band back together for a recording session. Possibly, he might have been thinking about the funky organ-based recordings exemplified by the Blue Note (1963) recording entitled Never Let Me Go with organist Shirley Scott, along with tenor saxophonist Stanley Turrentine, conguero Ray Barretto, bassist Major Holly Jr. and drummers Al Harewood and Clarence “Jelly” Johnson. Regardless of intent, what emerged was Do You Know A Good Thing? a rockin' groovy fun-filled session.

It starts with tenor saxophonist Eddie Harris's composition "1974 Blues" which opens with some slinky guitar work from Dave Sikula followed by tenor saxophonist Cory Weeds who offers some authoritative lines. Holding all this together is organist Chris Gestrin with some stuttering keyboard riffs and juicy sound. The previously mentioned Shirley Scott provides the material for the title track "Do You Know A Good Thing When You See One?" which is ready-made for organist Gestrin's full bodied approach to the instrument. The notes fly between Weeds and Sikula and get swept up in the flow of the number.

The ballad, "These Foolish Things" was written by Englishmen Jack Strachey and Holt Marvell in 1935 and picked up by Benny Goodman for a 1936 recording which gained some popularity. Cory Weeds wrote the current arrangement in a mid-tempo frame, and has some Latin conga accents from percussionist Jack Duncan. This rendition is full of charm with some smart hooks. Trumpeter Donald Byrd first recorded his composition "Soulful Kitty" (sic) "Kiddy" for Byrd In Flight (Blue Note, 1960). The band gives this number a good workout in finger busting style where each note has import as part of the flow.

Jazz and soul organist Hank Marr wrote the composition "(The) Greasy Spoon" for his King Records (1969) release Greasy Spoon and that track is a perfect closer to this session. Gestrin sets the stage with a funky organ groove which is on the gruff side. Weeds picks up on the line which has a slow-burn appeal, all the while drummer Jesse Cahill is laying down a grounded beat. As Cory Weeds states in the liner notes: " We need to forget about what was going on in the world..and make some joyous music."

1974 Blues; Do You Know A Good Thing When You See One?; Devilette; These Foolish Things; Soulful Kitty; Movin' Out; New Crawl; Greasy Spoon