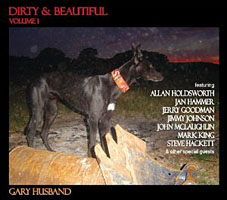 For some, recruiting an all-star cast means nothing more than a budget to support it, but in the case of Gary Husband's Dirty & Beautiful Volume 1, it reflects the many friendships the keyboardist/drummer has built over the years—all clearly happy to help deliver the album that should, by all rights, put him more squarely on the map as a leader in his own right. John McLaughlin, Allan Holdsworth, Robin Trower, Level 42...all well-known names in jazz and rock/pop circles; and yet, Husband has never managed the same cachet. Since focusing on making his keyboard work an equal to the reputation he's built as a powerhouse drummer, through albums including his wonderful solo piano tributes to Holdsworth and McLaughlin—The Things I See (Angel Air, 2004), and A Meeting of Spirits (Alternity, 2006)—as well as his ensemble-driven Aspire (Jazzizt, 2004)—Husband has, however, been achieving greater visibility, most recently in McLaughlin's 4th Dimension, whose To The One (Abstract Logix, 2010) is the overdue studio debut of a group that's been impressing audiences on the road since 2007.

If for nothing else—and there are plenty of other reasons, to be sure—Dirty & Beautiful is notable as the album that reunites McLaughlin with Mahavishnu Orchestra keyboardist Jan Hammer and violinist Jerry Goodman. That the three don't actually play together becomes irrelevant, as each turns in a stunning performance, from Hammer's guitaristic synth work on Holdsworth's potent opener, "Leave 'Em On," a longtime live staple for the guitarist's trio with Husband and bassist Jimmy Johnson, to McLaughlin's extended fireworks on Husband's "Dreams in Blue," the album's longest track at over ten minutes that, in addition to Husband's effervescent kit work, features a set-defining piano solo. Goodman's equally incendiary performance on the greasier "Between the Sheets of Music" also comes close to being an early set-stealer; an old Hammer tune on which the keyboardist doesn't play, leaving it to Goodman, Husband, Holdsworth and Johnson. It's been decades since the first Mahavishnu Orchestra imploded, but every one of these players has never sounded better.

Throughout, Husband is a multiple threat: a drummer capable of laying a meaty groove while, at the same time, ratcheting up the energy level with his interpretive interaction; a keyboardist who delivers finely honed melodism as much as expansively textured landscapes; and a broad-reaching writer, from the Joe Zawinul-esque "Bedford Falls" to the brooding "Boulevard Baloneyo," an alternate version of which is included as a bonus track on the Japanese edition. The debut of Husband's post-bop Drive, on Hotwired (Abstract Logix, 2009), may have been tragically overlooked, but the all-star cast and fusion leanings of Dirty & Beautiful Volume 1 should push Husband up into radar range, and hopefully lead to the second volume promised by its title.