Home » Jazz Articles » Ches Smith & These Arches: Finally Out Of My Hands

Ches Smith & These Arches: Finally Out Of My Hands

By Troy Collins
November 10, 2010
Sign in to view read count 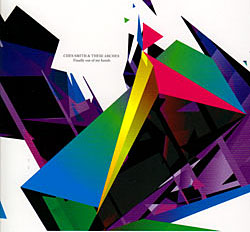 Despite its brief 35-minute runtime, Finally Out Of My Hands is one of the year's most intriguing releases. The debut recording of Ches Smith & These Arches, this visceral studio session features an unorthodox instrumental combination courtesy of some of New York's finest improvisers. Leading the unusual quartet from his trap set, Smith is joined by Downtown luminaries Mary Halvorson (electric guitar), Andrea Parkins (accordion, organ and electronics) and Tony Malaby (tenor saxophone). Eschewing conventional roles, they erase preconceived boundaries separating the frontline from the rhythm section, conjuring verdant sonic panoramas that balance compositional clarity with mercurial invention.

The band name These Arches alludes to the function of the arch in traditional bridge design, in which weight is supported by horizontal tension at the arches' intersection—a concept paralleled by creative improvised music's tenuous balance between freedom and form. Embracing this duality, Smith's writing juxtaposes intricate themes with free-form interludes, alternating bouts of trenchant angularity with passages of ethereal impressionism. Brief and to the point, Smith's concise structures and oddly tuneful themes are influenced by his longstanding involvement in the underground music scene as a member of such inimitable ensembles as Good For Cows, Secret Chiefs 3 and Xiu Xiu.

Nebulous and unpredictable, Smith's tortuous compositions embrace linear narratives rather than standardized forms, their irregular patterns following an idiosyncratic logic of their own design. Drawing on a plethora of avant-garde traditions, he varies arrangements and instrumental pairings, providing nuanced alternatives to the unfettered collectivism typical of unstructured free improvisation.

The haunting "One Long Minute" breaks form, unfolding as an atmospheric rubato tone poem driven by Malaby's ghostly flute-like altissimo—a serene respite from the preceding chaos. The cyclical variations of "It Rained and the Tent Fell Down" and the expansive "Disgust for a Pathetic Chorale" flout convention even further. The later introduces Malaby and Parkins' plangent long tones intermittently punctuated by Smith and Halvorson's throttling assaults. After a swift but tense bridge, the entire quartet regroups for the hushed coda, an effervescent mosaic of pointillist introspection.

Though short by contemporary standards, Finally Out Of My Hands trades duration for density, offering a compact study in dynamics, mood and tone that reveals subtle new details on each listen.

Anxiety Disorder; Finally Out Of My Hands; Sixteen Bars For Jail; One Long Minute; Conclusion; It Rained and the Tent Fell Down; Disgust for a Pathetic Chorale; Civilization.