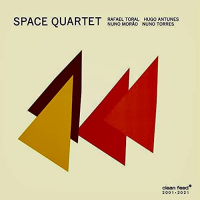 Listen closely to Directions by Rafael Toral's Space Quartet and try to ignore the voice in your head of June Tyson chanting, "space is the place, space is the place." While this is an instrumental production and Toral was born more than fifty years after Sun Ra, a similar aura permeates these six tracks. It's not that Toral is dealing with the evolution of big band music through the lens of Afrofuturism, like Sun Ra's early use of synthesizers and electronic keyboards. Toral has adopted and adapted customized electronics into his space program. This space music which began in 2004 as a solo investigation, has evolved from circuits and motherboards into a kind of merger with anthropoids. There was collaboration with the likes of Jim O'Rourke, Davu Seru Sei Miguel, Chris Corsano, John Edwards, Evan Parker, Christian Marclay, and Rhys Chatham. His first Space Quartet (Clean Feed, 2018) included bassist Hugo Antunes (heard here), but he has altered his lineup by adding drummer Nuno Morão and saxophonist Nuno Torres.

The result of Toral's experiments is his ability to manipulate electronic and acoustic feedback as an instrument in the same manner Torres plays his saxophone. Their organic musical call and response "Photonic Radiation" is as conversational as say, a saxophone/trumpet dialogue, if that back and forth was played out in the avant-garde arena. Like his musical compatriot Christof Kurzmann, Toral plays his instrument, not the other way around. The electric pitches that inform "Such A Hungry Yearning Burning Inside Of Me" coax Antunes' muscular bass attack and the energy ramps up with Morāo's busy drumming before the cackle and squawk of Torres fills the space. The bookended "Directions" and "Other Directions" glide by with an easily consumable swing, delivering a kind of ancient bebop futurismo.

Directions; Photonic Radiation; Southern Grooves; Such A Hungry Yearning Burning Inside Of Me; Moonlight Through The Pines; Other Directions.