By Doug Collette
January 22, 2012
Sign in to view read count 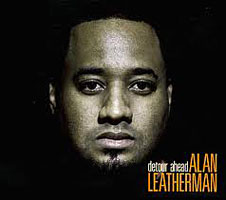 Two tracks into Alan Leatherman's Detour Ahead and the phrase "sweet soul music" comes to mind. But this isn't the rarified realm of Sam Cooke or Otis Redding with ballads. Rather, Leatherman resides—and comfortably so—in the role of classic torch singer

Careful phrasing, perfect breath control and deep emotion earmark the title song, "Blame it on My Youth" and Detour Ahead's nine other cuts. Recorded with a trio featuring pianist Rick Germanson, bassist Gerald Cannon and drummer Steve Williams, the accompaniment is not just backup for the singe; even the shortest interludes, including the individual spots and tradeoffs on "Bye Bye Blackbird," carry the air of involved improvisation.

The musicians work to interweave with the vocals throughout the performances, even when Leatherman speeds up out of nowhere on "This Is Always." Meanwhile, the basic arrangements, like the nimbly moving "You'd Be So Nice to Come Home To," are as classy and classic as Leatherman himself, formally-attired and carefully-posed in the album cover photos.

Considering his choice of material—from eternally respected composers such Lerner and Lowe ("I've Grown Accustomed to Her Face"), Cole Porter ("You'd Be So Nice to Come Home To"), as well as kingpins of jazz like Charlie Parker ("Parker's Mood) and Duke Ellington ("I Ain't Got Nothin' But The Blues"), Leatherman is as ambitious as he is accomplished. It's a small touch, indeed, to include printed lyrics in the CD booklet, but then the sonorous tones of this man's singing compels close listening and no better way to fully hear such sounds than follow the words.

Nuance abounds here, as in the sly relish within "Just One of Those Things" and the exquisite world-weariness permeating "Lush Life" (yes, Billy Strayhorn's). The album's all the more impressive, considering it was recorded and produced under the aegis of the artist himself. For the uninitiated or ignorant, it'd be simple to stereotype Leatherman as a clichéd role-player. But an abiding sincerity permeates his performances and those of his band, so they transcend caricature.

Detour Ahead thus becomes a noteworthy entry into a time-tested genre, as Leatherman breathes life into a role few have so capably assumed during the history of jazz singing.

Detour Ahead; Blame It On My Youth; Bye Bye Blackbird; You'd Be So Nice To Come Home To; I've Grown Accustomed To Her Face; Just One Of Those Things; This Is Always; Lush Life; Parker's Mood; I Ain't Got Nothin' But The Blues; No One Else.