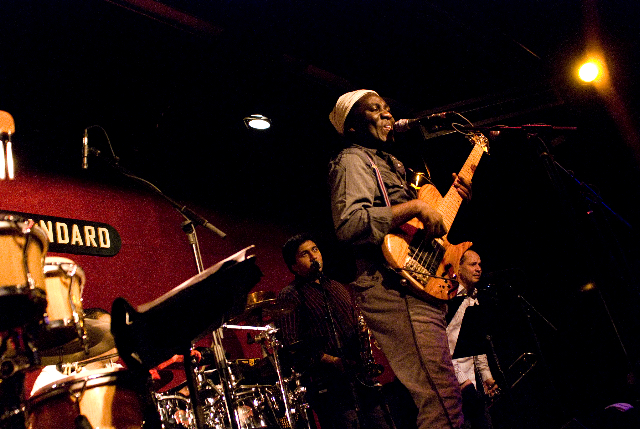 It might seem as though drummer/composer Sean Noonan was enjoying a quiet year in 2011, playing fewer gigs than usual. The reality is that he's been busy scribing new works, in preparation for a twin album onslaught in 2012. He's also planning an extensive reissue drive for his existing catalogue. Six months ago, Noonan played at The Stone with his Boxing Dreams String Quartet. Just as it sounds, that involved Noonan's drumming together with a more aggressive than usual ring of cello, viola and two violins. This gig at the intimate Douglass Street Music Collective studio (a loft environment on the ground floor) presented another band concept with a similar makeup, though involving a very different instrumentation. The Pavees Dance ensemble (and suite) increased Noonan's storytelling side, with his intoned narrative inhabiting most of the tunes at some stage of their proceedings. Violinist Tom Swafford violin remained from Boxing Dreams, joined by cornetist Kirk Knuffke, trombonist Brian Drye and clarinetist Oran Etkin.

The band's name hints at the nature of Noonan's new music. The Pavees are the "walking people" of Ireland, and the pieces mostly shared a suitably gypsy-rooted character. Noonan enjoys the luxury of filtering styles from Irish music, Eastern European wedding tunes, and a generally American immigrant fusion of ingrained folk song, all churned up with an improvising cut-up sensibility and a punkily staccato drive. Here, Noonan's works tilted from collected lyrical stateliness to a hurtling rabble of rucking, as he punctuated the twists and turns with his own emphatic blows, hammering hard to emphasize his verbal phrasing or splashing gently around the cymbals to underscore the gleaming harmonies of his pseudo-gypsy crew—seated players who sounded like they were standing, or even parading.

Who knows what the story is behind "Forced Meatballs," which seemed to involve said delicacies manifested as cosmically flitting entities. The forced became the force. Noonan included "The Wayfaring Stranger," but of course, it received his deeply personalized rendering, the traditional transformed into an avant folk recitation. The composer tackled his roots with "No Irish Need Apply," still a true tale, he swore. Indeed, a few days after this gig, I spotted just such a sign at Freddy's Bar in Brooklyn, only a few blocks southward. Okay, so "Freddy" is surely an Irishman himself but, in decades gone by, we could imagine the sentiment that Noonan was exploring. The composer wove words as a narrator of grimly urban faerie tales, burning a wistful campfire closeness with a socially satirical message, simultaneously melding naive wonderment and deadly schizophrenic darkness. Knuffke's pepper spray cornet dodged around Swafford's grit-dragging violin lines, Noonan's aggressively subtle drumming always driving the details of his horn crew. The construction of their parts sometimes had a delicately elaborate cascading effect, but when Noonan periodically decided to propel, they suddenly transformed into a lustily careening street combo. The music ended up being a kind of stately, embellished chamber folk, drunk on cobblestoned beer-spillage, but never tripping flat onto its face, always clogging like the nimblest of pixies.

On paper (or website), a week's worth of dates by Richard Bona might not seem massively exciting as a New Year's Eve run-up residency. The Jazz Standard has characteristically presented some spectacularly big-banded shows over the last few holiday seasons. The reality of live experience was very, very different, transcending all expectations. First, this was the debut of a specialized Mandekan Cubano band project, rather than Bona's regular manifestation. Second, even this first set of the first evening found the players in towering form. And third, this was no lightened Cuban fusion; this was a hardcore feast of driving roots rhythms. Okay, so fusion was allowed, given that the music also contained frissons from other Caribbean islands, plus the expected Cameroonian stylings from Bona himself, moving outwards across the West of Africa. Even so, the dominant sound was an uncompromising percussion-and-horns dialogue that would be at home in a sweaty Havana joint.

I ended up sitting at the front end of a long, frontal table, virtually onstage, and in a prime location to submerge myself in surround-sound percussion, plus the direct output of Bona's amplifier, right in its sonic flight path. All the better to study the bassist's minute, percussive skipping across the strings, his vocals acting as an extension of his instrumental complexity, or vice versa. The horn team of trumpeter Michael Rodriguez and trombonist Ozzy Melendez jumped from punchy riffing to nimble, emphatic soloing. Melendez, in particular, buzzed with urgency, his solos bonding salsa flash to Cuban son earthiness. Percussionists Luisito Quintero and Roberto Quintero also varied their roles, stoking the beats, then delivering frequent solo passages, whether springing from a congas or timbales base, with chekeré (gourd-rattler) and cajon (box-seat resonator) embellishments.

Over at the piano, Osmany Paredes appeared to be arriving from a slightly different place, his solo spots establishing a more jazzy aura, but a jazz hybrid coming straight from Cuba. The flow was still maintained, but his passages gave pause for contemplation before the harder horn-driven grooves returned. Bona also cleared a zone to allow some completely solo voice/bass guitar lightness, as songs emanated from his entire being, tripping feather-light, as organically as possible, smeared with subtle pedal effects. Another advantage of sitting right at the stage-lip was to observe at close quarters the sheer exuberance and delight that this band took in their creations. They pretty much admitted that even they were surprised how immediately this new music had coalesced into such a profoundly uplifting entity.

Ringing in the New Year at The Bell House can be habit-forming, especially when a new tradition has evolved where the Brooklyn soul collective Dig Deeper takes over the proceedings. For the last three New Year's Eves, they've presented some mighty fine shows, drawing a partying crowd which just happens to retain its specialist musical tastes in the midst of a champagne stream. This double bill with soulsters Sugar Pie DeSanto and Lee Fields was, not surprisingly, sold out. Fortunately, this didn't mean that the joint was too overcrowded. There was still room to shimmy.

Recently, veteran singer DeSanto's birth certificate was unearthed, revealing that this supposed child of San Francisco was actually born in Brooklyn—even though, soon after, her family departed the borough. To commemorate this newly established status, Dig Deeper pushed for one of Brooklyn president Marty Markowitz's famed proclamations. They succeeded, and lo, this Medieval-styled scroll-document was displayed just before DeSanto took to the stage. Actually born as Umpeylia Marsema Balinton, it's easy to see why she considered Sugar Pie as a more wieldy stage name. Her career began with work in Johnny Otis and James Brown's revues. As her birth certificate says, DeSanto is now 76 years old, but she has the burning energy of a performer 50 years her junior. Can this lady be the Iggy Pop of R&B? She was so uppity that the audience lived in fear of her next witty or withering observation. DeSanto's dance moves were in keeping with this spiky attitude, as she stretched her legs into the air and rolled around on the stage, a small (just under five feet), wiry yet powerful figure. Her voice retained a complementary strength, rugged and raunchy in its delivery of her pointed soul-blues combination.

The Sweet Divines band acted as backing, minus three of its four namesake singers, thus becoming The Divine Soul Rhythm Band, but still directed by keyboardist J.B. Flatt. Sole remaining Divine singer Jenny Wasserman took the role of DeSanto's frequent collaborator and younger cousin Etta James. Many of the hits were delivered during a concise, hard-hitting set: "Go-Go Power"; "Soulful Dress"; "Slip-In Mules"; and the sprawling, later-period slinker, "Hello San Francisco." Part of the set's thrill was to observe DeSanto cueing solos from the players, joking about who was the boss, but ultimately proving her dominance by acting as a conduit for their energies. Another thrill of a sort was provided when she invited a somewhat tall male dancing partner up onto the stage, proceeding to wrap her legs around his waist while he twirled her around. Then, DeSanto herself descended into the audience for further gyrations. Just two examples of her highly impressive youthful exuberance.

Following the 2011/12 Witching Hour, there was quite a considerable gap before Lee Fields & The Expressions began its set. It was a wise decision to place DeSanto in the pre-midnight position, as her performance was filled with more subtle nuances. Soul man Fields is a more conventional interpreter, and his songbook was more suited to general partying. Besides, some of the audience had started to disperse (or collapse) by this time, and Fields can be found reasonably regularly on the stages of NYC. This was DeSanto's first gig in the area for almost 46 years, when she last appeared at Harlem's Apollo Theater. It was an occasion to be savored whilst the crowd was at its peak.