By KARL ACKERMANN
April 2, 2017
Sign in to view read count 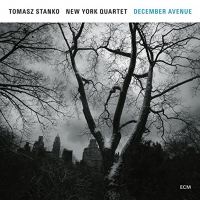 The elder statesman of modern Polish jazz, trumpeter and composer Tomasz Stańko has more than a forty year history with ECM. Dating back to his 1976 label debut, Balladyna, Stańko sounds to have arrived fully-formed, and in the company of Dave Holland and Finnish percussionist Edward Vesala. Stańko's trademark atmospheric and cerebral style is fully intact on December Avenue, his twelth album for Manfred Eicher's label.

Stańko's New York Quartet includes ECM artists David Virelles, whose Mbókò (2016) and Antenna (2016), amassed high praise, and Gerald Cleaver who has appeared on a number of the label's releases including those of Michael Formanek, Tim Berne, Roscoe Mitchell and Miroslav Vitous. Both were part of Stańko's Wisława project while bassist Thomas Morgan has been replaced by Reuben Rogers. The bassist's ties to the label are with Charles Lloyd on Rabo de Nube (2007), Mirror (2010) and Athens Concert (2011).

Stańko has long surrounded himself with a younger generation of top-rate musicians, helping to keep his own, introspective-leaning style, more open. Historically notably among those supporting players was the Lontano (ECM, 2006) group where the trumpeter was backed by the Marcin Wasilewski Trio who went on to substantial success. The New York Quartet has similarly brought out Stańko's considerable free improvisational skills but to a limited extent.

Virelles' meloncholy piano opens "Cloud," joined quickly by Stańko on a languid ballad that sets up the more spirited "Conclusion." On the latter we hear Rogers crafty introduction and Stańko's more animated playing but at just two- minutes, the piece doesn't quite live up to its energetic beginning. The pace doesn't accelerate again until "Burning Hot" where—relative to the reflective stroll of the opening numbers—the title is representative of Stańko's more inventive playing and the complex interaction with Virelles. "Ballad for Bruno Schulz" is essentially a Stańko/Virelles duo and the most appealling of the quiet compositions on December Avenue.

The minimal "Sound Space" leads to the energetic, boppish title track featuring a standout solo from Rogers and engaging contributions from both Stańko and Virelles, held together with some intricate and sophisticated work by Cleaver. "Yankiels Lid" is the most open of the twelve pieces and sees Virelles and Rogers at their most imaginative, while Stańko takes an accompanying role. "Young Girl In Flower" closes the album much as it began-a gentle ballad highlighted by Stańko's breathy signature style.

Stańko has been long been regarded for his ability to cover a wide range of emotions with his instrument and he can make the trumpet speak in tongues when he wishes to do so. But the avant-garde Stańko of circa Bluish (Power Bros., 1991) has long since been supplanted by the lyrically sophisticated minimalist of recent years. That mind-set works well in making his more visionary arrangements pop in the context of an entire album. December Avenue is strikingly balanced and tastefully performed by this well synergized quartet.