BY GEANNINE REID
April 2, 2017
Sign in to view read count 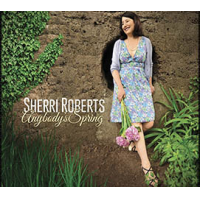 Vocalist Sherri Roberts brings the joy and promise of new beginnings with twelve standards, that offer a spring theme with her 2017 release, Anybody's Spring. Selections come from the jazz compositions of Clifford Brown and Tadd Dameron to the standard and not-so-standard fare of Rodgers and Hammerstein, Hoagy Carmichael, and Blossom Dearie favorite Bob Haymes, the set list is a spring lover's dream come true. The San Francisco based singer is a passionate, expressive singer whose emotive prominence never supersedes her musicality. Roberts has a diverse background in music training and experience and her style is deeply rooted in tradition, while obscuring the line between cabaret and jazz styled singing. On all the tracks, Roberts' balanced voice projects a clear laid-back phrasing with strong rhythmic placement and flawless diction. She cites that her style pays homage to the cool jazz pedigree of June Christy, Chet Baker, and Helen Merrill. Roberts is joined by: David Udolf on piano, Harvie S on bass, Akira Tana on drums and Sheryl Bailey on guitar (tracks 1, 4, 7, and 10).

Anybody's Spring is Roberts' fifth album as a leader and her experience and understanding of pacing an album is obvious from the first sounds of the opening selection, "It's Anybody's Spring." Roberts explains, "This is one of the most natural recordings I've ever done. Structured but not overly arranged, it's a natural outgrowth of who I am as an artist." Roberts and Udolf begin the selection, Roberts slides into the notes, creating a whimsical intro. With the addition of S, Bailey, and Tana the consistent core of Roberts vocal qualities emerges from start to finish. Her relaxed steady swing allows the lyrics plenty of time to be savored by the listener. As a unit, the group clearly keeps one foot in a style that will bring forth reminders about the art-form's origins. However, they only use this as a starting point to invite further exploration. For example, Bailey's phrasing and styling during her solo is a study in the fundamental jazz guitar language, while exploring modern harmonic concepts through clean acoustic arch-top guitar toned lines.

Roberts' versatility is shown by her imaginative and deeply thought-out presentation of "Joy Spring," choosing to state the first 'A' section of the melody with just her voice and S' big bass sound is an excellent choice. The slow medium tempo gives plenty of time for Roberts to unwind the bebop melody with clear diction. And in that same vein of versatility and variety, Roberts ventures into a wide-ranging, yet quite accessible, vocalese exploration that displays her true command of her vocal instrument. Roberts wrote the lyrics to a melody that was inspired by Clifford Brown's solo on his 1954 album, Clifford Brown/Max Roach. Tana's drum solo is musical and is nicely accompanied by S' swinging pulse. Roberts' final chorus is full of excellent swinging embellishments of this well-known melody.

Roberts reaches into her Blossom Dearie influence, with her pure timbre on "They Say It's Spring." Again, her vocal presentation is consistent to the core from start to finish. The deep in-the-pocket pulse laid down by S and Tana gives a swinging power to Roberts melody and Udolf's fine solo statement. Roberts power comes from a diaphragm that emits a plush, full-bodied voice that makes this performance worth being called a classic in the making.

"Lady Bird" again finds Roberts stating the first phrase of the melody in a duet setting, this time with drummer Tana's full accompaniment. Anybody's Spring really deserves appreciation when one realizes how much music is really played in this collection of tunes. In this semi-brisk, but still relaxed selection, listeners get treated to Roberts' refined voice, her polished diction and a first-rate arrangement. Featuring another fine solo by guitarist Sheryl Bailey, who offers up substantive playing in an economical solo space framework, a true testament to this cats' virtuosic character. Another fine outing by Roberts and a well-chosen group of supportive cast members, to sum up the beauty and bloom of the Spring season.

It’s Anybody’s Spring; Spring Sprang Sprung; They Say It’s Spring; It Might As Well Be Spring; After All It’s Spring; Joy Spring; Double Rainbow; Now At Last; One Morning In May; Lady Bird; While We’re Young; Spring Isn’t Everything.