Sean Ali: My Tongue Crumbles After

BY KARL ACKERMANN
April 1, 2017
Sign in to view read count 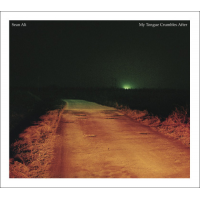 Improvisational bassist Sean Ali began his musical life as a guitarist, studying sitar and oud along the way. The Ohio native has been in New York City for more than a decade now and performs as a solo bassist, an ensemble player, and a spoken-word artist. He is the founder of The Mudbath Orchestra, a large ensemble that has been performing in and around NYC since 2011. My Tongue Crumbles After is Ali's solo bass debut album and features eight improvisations augmented on several tracks with sound effects played on cassette tape.

On the opening track, "Salutations" the natural voice of the bass is obscured in a mix of nature sounds and—briefly—a disembodied spoken passage. The acoustic bass stands alone on "Fingerdeep," a brief exercise in abstract plucking that precedes "Missing Persons Report," where the bowed bass buzzes like a swarm of bees. "Beneath the Cobbles" features a long-sustained tone through industrial noise and "Heartstack" returns to natural field recordings interacting with low, resonant notes from the bass.

Among Ali's eight original pieces, there are none that would fit into conventional categories. Within the empirical program, he offers a wide range of sonic experiments. Whether the squeaky wheel sound of "Lime Works," the minimal percussion of "Queens Gothic" or the bowed drone of the closing piece, "Hunger," Ali—a student of global linguistics—has found a unique platform for his narratives on the eclectic label, Neither/Nor Records.