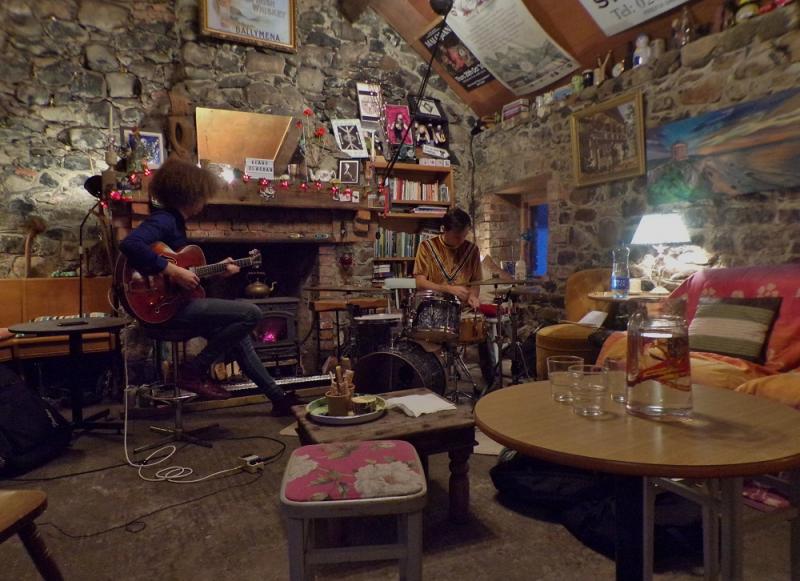 The old, stone and timber-beam cottage is nestled halfway up Keady Mountain. It's typical of numerous farm outhouses throughout Ireland. On the outside at any rate. Inside, however, it has been converted by organic farmers Joan McGandy and Mickey Mullan into an intimate live music venue. For the past five years, Keady Clachan, as it is dubbed, has hosted cèilidhs -social gatherings where traditional music and stories are shared. Keady Clachan's name has spread by word of mouth and musicians on their way to and from larger gigs will stop by here to play, charmed by the venue's welcoming character, the warmth of the hosts' hospitality and the very uniqueness of its remote location. Tonight, however, there are no singers, fiddlers or bodhráns in sight. Instead, Keady Clachan's door is open to jazz, with the duo of David Lyttle and Joseph Leighton.

The Keady Clachan stop-off is part of a multi-date tour that is taking the duo to off-the-beaten-track venues throughout Ireland. Small towns more attuned to the rhythms of Irish folk music or the strains of country, islands with even smaller populations, where entertainment is not so common -in such locales instrumental jazz is a stranger. The tour was inspired by a North American road-trip that Lyttle undertook in 2017, with saxophonist Tom Harrison. That funded trip, which was concept-based, tested the theory that jazz is only for those in the know, and took Lytle and Harrison to some fairly bizarre locations, and audiences unfamiliar with jazz.

The success of that trip persuaded Lyttle that the model could work anywhere, and the appeal of playing jazz to the uninitiated, as this tour into the Irish hinterlands has proven, is becoming addictive for the Waringstown drummer.

In a standards-laden set, and before a small but attentive audience, Lyttle and up-and-coming guitarist Leighton gave an artful demonstration of a duo dialogue built upon shifting rhythmic and melodic contours. Opening with the breezy "Without a Song," Leighton demonstrated his all-round game of sure rhythmic compass, improvisational fluidity and comping nous that has leveraged him a weekly solo residency in Bennigans, Derry; Lyttle, employing hands, brushes and sticks in turn mixed up lively grooves, and, in a featurette, melodic finesse. The drummer infused Chick Corea's "Spain" with overtly Brazilian samba rhythms, his skittering brushes and sousaphone-like bass drum kicks igniting Leighton's blue touch paper in a solo of flowing invention.

Leighton's harmonically deft intro to the brushes-steered ballad "The Way You Look Tonight" cast a quiet spell over the room. The guitarist's melodic embellishment of the melody was beautifully weighted, limiting his vocabulary only to the essential and drawing the listener in as with a well-crafted tale. Sam Rivers' "Beatrice" burned with greater intensity, Leighton's extended vamp ushering in an electrifying solo from Lyttle. On Lyttle's self-penned "Happy Easter" the drummer worked skin and metal with his hands as Leighton wove another mazy solo of pronounced lyricism. Lyttle is a wonderful hand percussionist, bringing an array of colors and textures to his playing without ever resorting to showboating.

A gently beguiling version of the standard "I Should Care"—a favorite of Bud Powell's-saw some of Leighton's most persuasive extended soloing, with Lyttle coloring the spaces with some lovely brushwork. A short rendition of Joe Henderson's "Serenity" closed the first set on a more up-beat note, with a lengthy vamp launching Lyttle on a thrilling drum solo.

The intermission allowed time to get to know the other people present—Keady Clachan is sociable like that—as hot tea, cakes and chocolate were offered by the generous hosts. Small though the venue is, it's a veritable treasure trove of books, gig and festival posters and eclectic bric-a-brac. Old concert tickets appear in the nooks and crannies, while a spectacular tapestry depicting Bangladeshi tea-pickers adorns a segment of the ceiling. You could spend hours lost in happy contemplation here.

The recommencement of the music refocused everyone once more as softly crying cymbals ushered in "Autumn Leaves." Lyttle switched between hands and brushes in sympathetic response to Leighton's caressing handling of this Joseph Kosma/Johnny Mercer song. Another closing vamp saw Lyttle this time work his brushes with a light yet bouyant touch.

A standout tune of the set came with the Lyttle original "Summer Always Passes." Written during a five-week British Council residency in China in 2017, and inspired by a Chinese proverb that cautions against resisting natural change, Leighton's trilling guitar and Lyttle's cymbal splashes and bird-song whistle were highly evocative. The real meat and bones of the tune, however, resided in the meeting between painterly melody, boppish bursts and hip-hop-inspired rhythms. Lyttle is an accomplished composer and the concert would have been in no way diminished by a greater balance between jazz standards and his original compositions.

Leighton was particularly captivating on a very pretty reading of "My Ideal," a song he features in his solo gigs, and on the ballad "Old Folks"-demonstrating an emotional depth to his technically advanced playing. There was some feisty duo dialogue on "Body and Soul" and intricate rhythmic interplay on the elegant "Windows" -a heartfelt tribute to the late, great Louis Stewart, with whom Lyttle played for a while in the early 2000s. An impressive concert concluded with Charlie Parker's "Segment," an up-tempo vehicle for final hurrahs from both musicians.

Lyttle is well-established as a world-class drummer—one of several strings to his bow-and it's always a thrill to catch his gigs. But this was an exciting opportunity to witness the special talent that is Joseph Leighton, in a venue the size of your living room. At just twenty one years of age, the Derry guitarist is just starting out, but the early signs point to a distinguished career ahead. There will be more duo gigs from Lyttle and Leighton on the second leg of this Irish tour in November—keep an eye on Lyttle's website for details—and the duo is already looking ahead to 2019.

That's great news for music lovers, regardless of their degree of familiarity with jazz. Music this good, played with such expertise, passion and pizzazz, can connect with almost anyone.