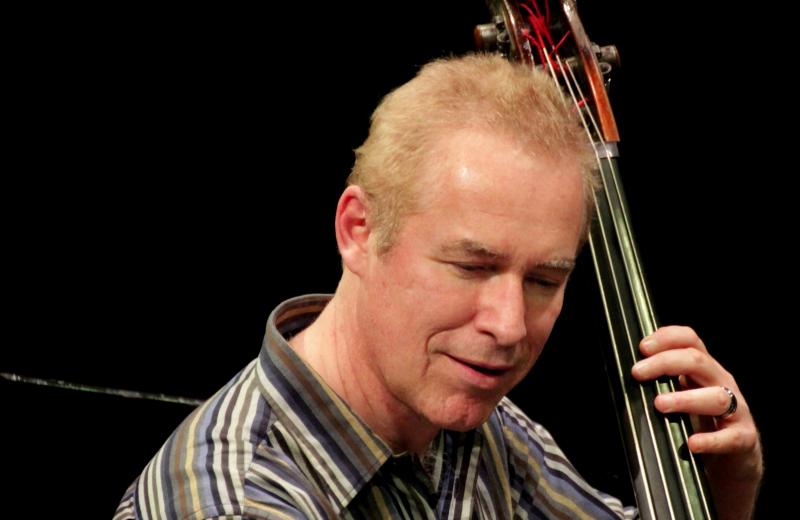 On the opening night of the 40th Annual Lakeland Jazz Festival, bassist Dave Morgan gathered a host of friends and treated Northeast Ohioans to a rare performance of his The Way of the Sly Man (Being Time, 2010). The piece, based on the ideas of 20th-century spiritualist G. I. Gurdjieff—mixing jazz with Middle Eastern, Indian and African music plus Gurdjieff's own musical ideas—hadn't been performed live since premiering in three local venues over a weekend in October, 2009 and it certainly deserves a wider airing. Here, it served as an energetic, intellectual and inspiring kickoff to the fest's ruby anniversary, an affair that also featured the Yellowjackets' first date with new bassist Felix Pastorius on Saturday night, plus big band shows on Sunday and plenty of performance and educational opportunities for high school and college bands throughout the weekend.

Before Sly Man, the 14-piece ensemble ran through a brief, five-song set that featured vocalist Shannon Eller, who has worked with Morgan's group on previous projects including a Nancy Wilson/Cannonball Adderley tribute. They tackled "The Masquerade Is Over" from that set, plus "Fever," the song Peggy Lee made famous in the late 1950s, and "Gypsy In My Soul." Eller's full, easy vocal style, replete with effortless dynamic lift, coupled nicely with the featured instrumentalist on each song: twining thrillingly with Howie Smith's tempting soprano sax throughout "Fever"; melding with Brad Wagner's comfortable, flowing tenor sax on "Gypsy"; and providing the bright veneer over the gruff, heartbroken reality sounded from Jack Schantz's flugelhorn on "Masquerade." The group opened the set with a rough-and-tumble go at Tadd Dameron's standard, "Hot House," which Morgan drolly dubbed "Outhouse," then closed with an invigorating race through Frank Zappa's "Echidna's Arf (of You)" and "Don't You Ever Wash That Thing?," which afforded the younger members of the outfit—keyboardist Joe Leaman, guitarist John Anthony, mallet player Bob Young and drummer Eddie Davis—a chance to shine with heady, often effects-laden, zest.

The Way of the Sly Man began after a brief intermission. Eller introduced the first movement, "The Way of the Fakir," as she would subsequent movements and the parts therein, with spoken-word glimpses into Gurdjieff's thought. These explanatory notes perhaps tempered the force of the piece moving forward uninterrupted, but they did successfully set the movements to their philosophical underpinnings. While the first part of "Fakir," "The Search (Seekers of the Truth)," opened on the drone of Schantz's harmonium and gentle brush from percussionist Jamey Haddad's large, broom-like implements, Smith wasted little time in driving his soprano sax into mad, extended exclamations well at home with terrified horses. It was an urgent departure from the recording, and it carried over into trombonist Chris Anderson's own rather desperate warbling on "The Law of the Three (Dervish Dance)"—the pair fashioning something of a sonic Guernica. Anderson shone later on "Identifyin' (Blues for G)," which he opened alone with a growling antagonism that soon coupled with more positive, self-affirming tones—the duality continuing throughout the piece as an intriguing battle with self.

The absence of guitarist Bob Fraser and pianist Dan Wall, who played on the recording and original performances, seemed to inspire Morgan into re-crafting. He had vibraphonist Ron Busch open "Harmonious Development" in Fraser's stead, and Haddad (with a jangling frame hand drum) fill in for Wall on the intro to the closing "Esoteric Circle." Both supplied nice, re-characterizations of their associated pieces. And this night, guitarist Anthony and pianist Leaman each etched new, individualist wrinkles to the overall composition—fitting, it would seem, to the Gurdjieff ethic, and, certainly, to the ethic of jazz and live performance in general. With any luck, music fans in Northeast Ohio and—hopefully—beyond will be gifted with additional readings of Sly Man—truly one the new century's great compositions for large ensemble.