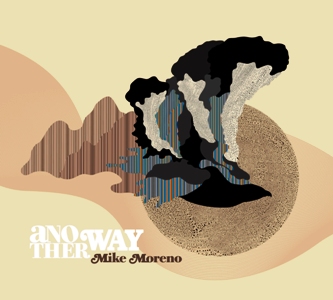 Though it's difficult to stand out in a climate where new names appear almost daily, Mike Moreno has proven to be one of the more identifiable young jazz guitarists in recent years. At home in a number of settings, his fluid style has been found in the abstract hip hop styling of Q-Tip's The Renaissance (Universal Motown, 2008) and has received accolades from Pat Metheny who commented that Moreno's is "A really talented guy who impressed me beyond the notes, for his general feeling, and what he's going for." And it's not just Moreno's playing that impresses—his compositional prowess also garners attention on Another Way , his fourth recording as a leader.

Similar to his 2007 debut Between The Lines (World Culture Music), Another Way features Moreno compositions performed by a robust ensemble that includes rising vibe players Warren Wolf and Chris Dingman. The combination of guitar, vibes, and piano (longtime associate Aaron Parks is a great outlet for Moreno's contemporary charts that find inspiration from Maurice Ravel to Wayne Shorter, while speaking the guitarist's own dialect.

"Spinning Wheel" is a good example of Moreno's forward-thinking melodicism. The sound is layered, elevated by the chordal instruments' communication and spacious solos. Known for his labyrinthine runs on electric guitar, Moreno's acoustic technique is equally impressive and surfaces in two duo pieces with Parks "Waking the Dance" and "The Mariner" further emphasizing their simpatico lyricism.

The set isn't one-dimensional. The darkly tinted vibe of "The Fifth Element" is built around a persistent groove that's glued by Matt Brewer and Ted Poor's rhythmic flexibility; only to be followed by "Show Fall," a gorgeous meandering piece with nuanced shades. The addition of vibraphones is another determining factor on two of the set's hottest pieces—"One And A Half" and "Behind The Wall"—both spotting the inventive mallet of newcomer Warren Wolf and Moreno's blistering guitar.

Another Way continues Moreno's pattern of excellence and individuality while being open to new possibilities.

The Spinning Wheel; Waking the Dance; One And A Half; Show Fall; Another Way; Behind The Wall; The Mariner; Mirror Mirror.