BY DAN MCCLENAGHAN
March 7, 2012
Sign in to view read count 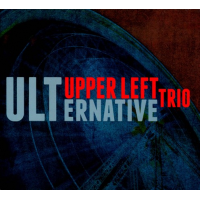 Portland, Oregon's Upper Left Trio has been together nearly a decade. The group began its recording journey on Origin Records in 2003 with Cycling. Ulternative is the trio's fourth recording for the label, and continues to push its music forward.

The piano trio has, since pianist Bill Evans' late 1950s/early 1960s recordings with bassist Scott LaFaro and drummer Paul Motian, ridden the three-way interaction approach rather than the earlier mode of operation, with pianist supported by the band mates' subtle rhythmic input. The Upper Left Trio is definitely interactive, and they're also a unit that leans in a modern direction, beginning with the disc's opener, "Smells Like French." Pianist Clay Giberson displays an energetically percussive outlook and bassist Jeff Leonard proves he's no stranger to the groove, while drummer Charlie Doggett lays down a rock-tinged, rock-solid beat.

Songwriting duties are shared, though Giberson's wrote or co-wrote seven of the twelve offerings. Leonard contributed four tunes, and Doggett penned one. The lone cover of the set is "Home," a thoughtful ballad with a melancholy mood. Leonard's "Swamped" features Doggett's steady snap and pop drumbeat backing Giberson on electric keyboard in an effusive march, while Doggett's "Steel Wheel" sounds eerie and experimental—amorphous until Giberson produces a loose melody.

Though much is said about equality in the modern piano trio, it's usually the piano serving as the main voice, and that's the case with Upper Left Trio. Giberson sits in the main tunesmith role, and his instrument is the main melodic voice, very distinctively on the pianist's "Crush," a propulsive romp with some intricate harmonies and a stealthy bass/drum rhythm. "Particles of Noise (excerpt)," co-written by Giberson and Leonard, churns from a chaotic and turbulent introduction into a ominously implacable momentum.

"Cross Off The Stars," another Giberson original, nods perhaps to Bill Evans and his version of "Turn Out the Stars." There is an inward Evans feeling here, as Giberson's light touch and beautiful harmonics combine with the trio's most exquisite three-way interplay.

Smells Like French; Swamped; Particles of Noise (except); Cross Off the Stars; Fig; Home; Fear & Bright Colors; Steel Wheel; The Crush; After Us; Your Chariot Awaits; True North.