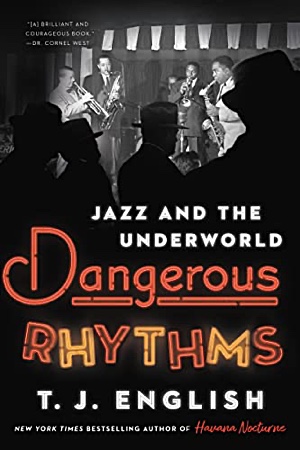 The subtitle of this not uninteresting history by T.J. English could well be "Sex, Drugs, Jazz, and the Mob," because, for the most part, that is what you get. It is a flawed book, in part because there are errors of fact, some awfully florid prose, a few egregious typos, and more than a little magical thinking in its principal argument. On the other hand, I found myself laughing out loud in a few spots, mostly because of unprintable invective used by our friends in the Outfit. I was alternatively horrified and amused at some of the accounts of violence and thuggery. Made men don't take an IQ test, and the standards for musical performance in jazz may be high but involve intelligence of a different sort. Altogether, this is a book worth reading. How seriously you take some of its logic is another matter.

The story begins with Storyville and New Orleans, of course, and few surprises, other than one, which is a doozy. Few readers are probably aware that the largest mass lynching in American history involved Sicilians in New Orleans, who were barely considered any better than Blacks in the late nineteenth century. Nor was this attitude confined to the South or just Sicilians per se. English's test case for the proposition in the entertainment world was Louis Prima, although young Louis Armstrong soon enough found himself hooked up with the local hoods, especially white ones, who were legally privileged under Jim Crow, and therefore desirable "protectors."

Leave it to the genius of the US government to find a way to criminalize goods or services that a lot of people want. The effect is to make providing them very risky, very profitable, and probably very dangerous as well. No surprise that the people drawn into furnishing these activities are not your law-abiding, model citizens. People at the margins of respectable society (not much to lose, a lot to gain)—especially immigrants, including not just Italians, but Germans, Poles, Jews, and Irishmen could make some serious money in the rackets. They also had to police themselves, keep the "legitimate" police and judicial system at bay, and enforce property rights, usually at the end of a gun or a knife. So, there you had it: the Mob, in all its rich ethnic diversity, with Sicilians, who had known the evil heart of discrimination, as the kind of social conscience, if not the brains, of the whole concoction.

Of course, jazz was disreputable too—even the name has been variously ascribed to various aspects of sex and sexuality—so the affinity of disreputable music for disreputable people who found profit from selling it along with various controlled substances—for a time, even alcohol under Prohibition (1920-1933), well, jazz and organized crime were made for each other. A durable alliance in twentieth century America was established, to be found in all the major cities, and not a few minor ones, especially places where you could bring together the bearers of African American tonalities and European compositional form and instrumentation. Once technology, especially radio and the phonograph, became the prime form of distribution, the step to mass entertainment for America's downtrodden working classes (suffering, English tells us, under an equivalent form of wage slavery and corporate thuggishness to the real thing Blacks had known) ran from Bing Crosby to Frank Sinatra and a host of lesser pretenders. While vocalists seemingly have pride of place in English's account, swing bands and boppers never lag far behind. Thanks to Cuba, Afro-Caribbean music, and the fusion of Latin rhythms with the blues, you also got Latin jazz, with its own array of disreputable, if talented characters, like conguero Chano Pozo, to whom English devotes an entire chapter. English does not tell us if Fulgencio Batista, whom Fidel Castro overthrew in Cuba in 1959, was hip, but fans of The Godfather will already have the entertainment version of this story down. And yes, it includes a particularly lurid version of the tales of Superman, and that does not mean Clark Kent's alter-ego.

For the most part, if you want potted versions of the story of Las Vegas; Batista's Havana; the much-lamented 52d Street clubs in New York; Central Avenue in Los Angeles, and of the clubs and their dramatis personae you will have come to the right place. You also get a brief, but all too accurate portrayal of some of the sketchier recording labels in the 1950s, and of the grief that so many performers found in dealing with them when no one else was much interested. And, yes, the ugly racism and racial divisions that ran through what had begun as Black ethnic music are also here in all their disturbing brutality. English does not shy away from any of this, even though its mere mention frequently brings well-intentioned authors to grief. One way or another, race, class and gender in jazz are all here, or, at least, a good deal.

Were Sicilians really more sympathetic to "Negros," at least at the outset in New Orleans, because of their parallel experience of violent racism? Speaking as a partial member of the American branch of that group, personal experience suggests otherwise. In other words, was this how the Mob made its "peace" and thus controlled so many Black entertainers? I cannot repeat Louis Armstrong's parting (x-rated) words to his "manager" Joe Glaser at the side of Glaser's deathbed, but somehow, you suspect that Pops was under no illusions. This is really not an edifying story, but some of its weaknesses notwithstanding, is a worthwhile read in the history of American jazz nonetheless.