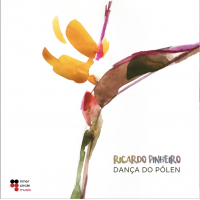 The pandemic has dictated solo recordings for many artists, but for Ricardo Pinheiro, solo doesn't mean unaccompanied. He utilizes multi—tracking to great effect on Dança Do Pólen. The Portuguese guitarist's previous release Caruma (Inner Circle Music, 2020) was a trio session which he shared with two vocalists. Here he is solo, but never alone.

Pinheiro delivers ten economical tracks in this 35 minute release. Opening with the most gentle notes of "Ad Perpetuam," he adds a second track, then accompanies it with a third. Each layer carefully woven into a peaceful melody. The guitarist has plenty of technique, but uses it sparingly. He layers acoustic and electric guitars on the title track with a simplicity that might make you think of Pat Metheny, plus effects "Love Song" that evokes Bill Frisell without directly referencing either artist. There's a merging of folk, classical, and improvisation in Pinheiro's music. His touch is ever patient with "Resina" and gentle lovingly "Closure." The majority of the tracks sound as if he were performing for an audience of one. The exception being "O Mostrengo" which opens with gusting winds followed by jolts of guitar vibrations which cast a supernatural eeriness over the composition. Not to worry, Pinheiro has the storm and the calm all under his very capable control.