Dan Wilensky: To Whom Much is Given...

By C. MICHAEL BAILEY
March 15, 2011
Sign in to view read count
Tenor saxophonist Dan Wilensky is a Renaissance Man and an educator, both facets of his character evidenced in his musicians' guide, Musician!, and the album If You Only Knew. What Wilensky provides over these two offerings is a masterclass in tasteful and well-behaved musicianship in the real world. No booze- swilling or reefer madness here, only straight professionalism.

Music and music making are no joke to Wilensky, but that doesn't mean he lacks a sense of humor. Both are in abundance in his writing, composition and interpretation. Wilensky is multi-talented so we should expect much from him. Fortunately, he has much to say, in writing as well as music, and he says it very well. 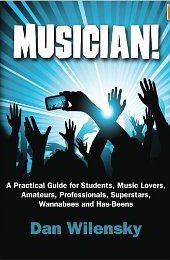 So you wanna be a rock n' roll star? Wilensky feels your pain and provides a primer for (hopefully or eventually) making music for a living. Musician! is a slim volume, dense with information, and presented with a wry sense of humor and a wink. It is divided into five broad parts: Nuts and Bolts; The Next Plateau; Selling Yourself; Philospical and Spiritual Guidence; and Tales from the Trenches.

These sections are further divided into smaller subsections written to be read at tempo. Wilensky's writing is lean (read: not overwritten). He wastes few words, ensuring that the information he conveys is in the least number possible: the most critical quality of good writing is brevity. This philosophy extends to composition. Wilensky notes that composing music adds a necessary dimension to interpreting others' music. Original and standard performance informs one another.

Wilensky espouses a single over-arching principle: professionalism. Whether it is being punctual at gigs or presenting yourself as a professional, he tows the hard line. There is no room for the romantic notion of the juiced hipster or junkie genius. This is serious business, and never forget that music is a business. He is no less yielding on the craft of the musician. Wilensky properly thinks that it is inexcusable for a musician to be unable to read music. He echos every piano-teaching nun that ever slapped a knuckle with a ruler.

Wilensky carefully avoids dropping names. He has been a successful musician who has performed with many other successful musicians. His practical experiences are recounted in the final section, Tales from the Trenches. Here, the saxophonist recalls several carefully chosen learning opportunities he had in his 30 year career. Entertaining, informative, reverent and helpful, Musician! is a treat for anyone interested in music. 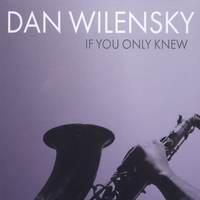 Aside from the obvious, that Dan Wilensky is a musician, he is also, foremost, a teacher. His book Musician!, detailed above, amply indicated that much. His recording If You Only Knew actually does the same thing, mirroring the critical points touched on in the book: brevity, professionalism, structural musical competency, simplicity, humility and grace.

Were we to consider If You Only Knew academically, it would be a mastersclass on composition, interpretation, performance practice and repertoire selection. Wilensky introduces himself with an old standard, "Tea for Two," Vincent Youmans' 1925 show song for the musical, No, No, Nanette. The song begins and progresses in an orderly, organic fashion. In Wilensky's hands, small- combo jazz is an intimate alchemy performed by master wizards.

The choice of this standard to open the disc offers Wilensky the opportunity to educate the listener about his approach. Specifically, here, he is conservative in both the "head" and the solo sections. No John Coltrane squealing or Albert Ayler honking, just straight melodic lines. Wilensky provides ample solo room for his fine rhythm section. Bassist Dean Johnson serves up an angular, on-the-beat solo just long enough to cleanse the palette before wilensky closes the piece.

The saxophonist then demonstrates his compositional wares in a variety of styles. "Needs and Want" is an edgy modern jazz piece, well suited for Bob Himmelberger's piano explorations. The title piece is a lilting, lightly bossa nova affair, a ballad of careful beauty that comes to a simmer and beyond. Wilensky sounds like everyone and no one. Just when you think you hear Stan Getz, Randy Brecker breaks in. Or maybe a Sonny Rollins tone escapes his horn only to end up sounding like Dexter Gordon. His own voice, a strong topic in Musician!, is well informed by his experience and all who preceded him.

"Train Windows" and "Luck 13" are arpeggio driven vehicles that allow the saxophonist his middle register. "Saxafras" is Wilensky's R&B contribution where he shows off his experience playing with Ray Charles. Churchy and torchy, the piece is a showstopper in the best sense of the word. Wilensky walks the walk presented in his book, producing a solidly fine quartet recording that demonstrates how the mainstream is properly performed. This is fine music finely tuned.

The second standard on the disc is Horace Silver's "Peace." Wilensky arranges the song at a slow tempo, drawing from it the soul Silver gave it.

Tracks: Tea for Two; Needs and Wants; If You Only Knew; Peace; Train Windows; Jazzapalooza; In Our Time; Reasons; Saxafras; Luck 13; Allin All.