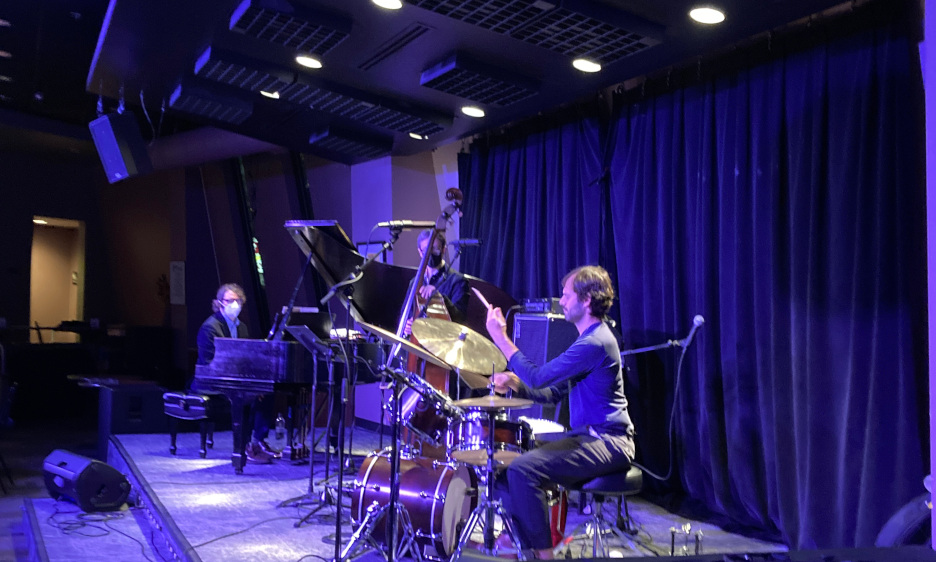 Are we living in a golden age of the piano trio? The recorded evidence from 2022 would suggest that we are. Piano trio recordings by John Escreet, Fred Hersch, Aaron Parks, Gonzalo Rubalcaba, Marta Sanchez, Matthew Shipp and Eri Yamamoto were among the year's strongest releases. Those trios were led by pianists, no surprise there.

Yet the two most notable piano trio records were led by drummers, Tyshawn Sorey's Mesmerism (Yeros7) and Dedication, released on his own Cygnus label by Dan Weiss.

Does a drummer-led trio approach the music differently than one lead by a pianist? With bassist Thomas Morgan and pianist Jacob Sacks, Weiss made a compelling case.

His single, 67-minute set at Cleveland's Bop Stop, the first leg of a short tour around North America's Great Lakes region, had a surging yet finely controlled sense of flow and momentum that served as a projection of his voice behind the kit.

Midwinter on the shores of Lake Erie brings dark days and leaden skies, and Weiss' "For Andrei Tarkovsky," one of the album's nine dedications, caught the spirit of the season. The looping, minor-key arpeggios with which Sacks began the piece and Morgan's brooding bass solo set a Nordic-ECM-y mood. But Weiss gave the music a sudden push, smoothly downshifting into a more linear rhythm.

Without a break, piano and drums fell quiet for a statement by Morgan, accompanied only by a loud conversation from the club's kitchen. Weiss, an accomplished tabla player, quietly rocked a slow, 4/4 rhythm playing the kit with his hands. Switching to sticks, he laid a subtle but stately backbeat behind "For Bacharach" that melted into the knotty labyrinth of "For Nancarrow," dedicated to the American composer of fiendishly difficult, devil's clockworks piano music.

If there's a halfway point between Burt Bacharach and Conlon Nancarrow it might be Thelonious Monk, and signaled by several long-spaced cymbal hits, the band devoured his "Criss-Cross." It was a showcase of everything this band can do, with piano and drums exchanging purposeful, quarter-note volleys, Sacks exploding into furiously rhythmic passages and Weiss dropping triple-time episodes among the press rolls and other bop drum language that he so clearly loves. This was the evening's most adrenalized music-making and it might have been the most legible, as the audience of more than 50 (on a Sunday evening!) roared their approval.

Another bass solo, this time, genuinely unaccompanied, introduced "For Vivienne," dedicated to Weiss' daughter. Morgan's singing, expressive bass sound was the perfect vehicle for the song's warm harmonies and tender melody, right up to the power-ballad climax. Once again, Weiss' cymbals cued the next piece.

"For Grandma May" continued the pensive mood with a haunting, scalar unison figure for Morgan and Sacks, a moon obscured then revealed by passing clouds over the aurora borealis of Weiss' mallets shimmers. Building up into a grand, almost rockish processional, the music just stopped.

Weiss cued the next piece with a high-velocity drum solo full of precise stickwork and cross-handed wizardry in which you could hear the drummer's great admiration for Philly Joe Jones, a connection made explicit as the band dug into "Milestones." Here, Weiss honored his influences not with imitation but innovation as he fractured and stretched the pulse and threw in what sounded like some South Indian chakradhar rhythm cycles into his drum solo. The head returned clad in thick polychords by Sacks, and with an emphatic flam from Weiss, the music came to an abrupt halt. Just like that.

It was a virtuoso gesture with just a drop of showmanship; the drummer had the last word.

Except that he didn't, exactly. After back-introducing the songs and catching his breath (Weiss admitted some fatigue after receiving a COVID booster shot two days earlier), he and the trio charged into "For Jacob Sacks," a particularly apt dedication since the pianists' parents had driven from Ann Arbor, Michigan for the show. They were seated in the front row, but not on their son's side of the stage. Their table was right in front of Weiss.