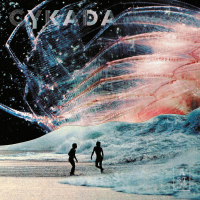 Cykada has been making waves on London's genre-melting alternative-jazz scene since 2017, but has yet to acquire a profile akin to those of some of the other bands with which its musicians are involved. These include spiritual-jazz septet Maisha and the Afrobeat-infused Ezra Collective. The release of Cykada, however, is going to strap a booster rocket to the band's profile.

Like its peers, Cykada embraces cultural influences from around the globe. West African, Andalucian and Turkish elements are to the fore, mixed with London-generated dance music and, especially in the horn section, retentions of the post-John Coltrane African American jazz legacy. There is, too, an apocalyptic strand in Cykada's music, to which we will shortly return, which sets it apart from most other London bands.

During the first minute of opening track "Creation," Kaner-Lidstrom essays an uncannily precise distillation of Ted Curson's legato passages on Charles Mingus's masterpiece Charles Mingus Presents Charles Mingus (Candid, 1960). Tasty, but as an overture it is unrepresentative. For much of the album, Cykada's closest comparator comes from present-day London and The Comet Is Coming. The interface between team Mollison / Kaner-Lidstrom and team Pérez / Gichigi-Lipere is in the same galaxy as the one existing between Comet's reed player Shabaka Hutchings and its keyboard player Danalogue the Conqueror. The last three tracks of the five-track Cykada touch on similarly apocalyptic territory as Comet inhabits on Channel The Spirits (Leaf, 2016) and Trust In The Lifeforce Of The Deep Mystery (Impulse, 2019).

Cykada was recorded in December 2017 at Hackney's Total Refreshment Centre, then a key platform for the new London jazz (the venue was closed by Hackney Council in 2018 following alleged licensing-law infractions, though it continues to make itself heard through live-music presentations at other locations). Hopefully, another Cykada album will follow soon, this time perhaps without such a lengthy gap between recording and release.