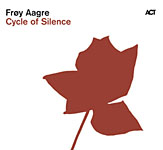 For her first album on the internationally distributed ACT label, saxophonist Frøy Aagre continues along the path begun with her earlier releases on the Norwegian AIM label—Katalyze (2004) and Countryside (2006)—mining her own combination of melancholic Nordicism, Baroque classicism and American jazz tradition. As on Countryside, she expands her core piano/bass/drums quartet on six tracks, enhancing the disc's overall chamber vibe with cello, and the surprisingly vocal combination of French horn and trombone.

This time, Aagre puts down her tenor and focuses solely on soprano—her main axe, anyway. Perhaps most surprising for a young Norwegian saxophonist, the iconic Jan Garbarek is not an obvious touchstone; instead, Aagre's tone more closely resembles Dave Liebman's—no surprise, given she studied with the American soprano specialist in New York. But Aagre's approach is almost diametrically opposed to Liebman's more expressionist tendencies, instead leaning more greater economy and fragility.

While Aagre's playing is never less than thoroughly engaging and mindful of the needs of the music, if there's an instrumentalist who shines on Cycle of Silence it's pianist Andreas Ulvo. In addition to being a member of Aagre's group since Katalyze, the increasingly ubiquitous Ulvo is a member of the collective Eple Trio, responsible for the sublime The Widening Sphere of Influence (NORCD, 2008), and helps Norwegian trumpeter Mathias Eick kick his more restrained 2008 ECM debut, The Door, into higher gear in performance. A versatile player, Ulvo demonstrates a gossamer-like touch on the intro to the contrapuntal Bach-isms of Aagre's title track, but is equally capable of greater expressionism during the more propulsive modal ostinato of his solo on the same tune.

Aagre's entire quartet is back from Countryside, and the time spent working together has paid great dividends. The group rarely approaches a simmer, let alone a boil, but its profound intuition makes songs like the lyrical "Words On An Envelope" resonate with a kind of seamless comfort, transcending mere playing of the music into the realm of truly feeling it.

Cycle of Silence's writing, then, is what really distances the disc from Aagre's previous two and demonstrates considerable growth. French hornist Trude Eick and trombonist Øyvind Brække—known to ECM fans for his work with Trygve Seim and the collaborative group The Source, whose self-titled 2006 ECM disc demonstrated similar "no grandstanding" restraint—lend greater weight to "Long Distance," the album's brightest tune and a feature for bassist Audun Ellingsen's most intense solo of the set. The horns also expand the soundscape on the indigo-tinged yet magisterial "Lost Connection," a brooding tone poem colored by drummer Freddy Wike's astute textural choices.

Aagre's comingling of folk and classical traditions isn't particularly innovative in the world of Norwegian jazz, but she still succeeds at asserting a distinguishable voice on Cycle of Silence. An appealing but largely dark album whose landscape is defined by the sure-footed playing of Aagre, her quartet and her guests, it's another sign of the German ACT label's commitment to bring music from the north to an international audience.