By Mark Corroto
December 22, 2020
Sign in to view read count 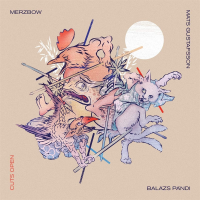 To restate the premise, the quietude is relative.

Listeners accustomed to Merzbow's harsh Japanoise may take satisfaction in the effect Hungarian drummer Pándi has on Merzbow. He has, in this trio and on several duo outings, corralled and tamed Merzbow's approach with his own fierce attack. Add the wild man Gustafsson and the intensity rises exponentially. What makes Cuts Open such a special recording is the that trio zigs when you think they will zag. The four improvisations captured are less crowded, dare we say delicate? Opening with gong strikes, rattles, and murmured fizzing electronics, the trio takes a road less traveled. Gustafsson explains that the studio contained an array of percussive instruments, which all three musicians make use of throughout. Yes, Gustafsson picks up his saxophone here and there. With "On We Went Home," he applies breathy flutters and with "He Locked The Door," we catch his signature overblown saxophone shred. Mostly he matches Merzbow with electronics. Both musicians modulate their sound to allow for separation. With this restraint, Pándi swaps thunder for granularity, displaying a delicate and keen sense of color and timbre. While this may not be your typical Merzbow outing, it does prove his ability to morph and adjust to differing environments.