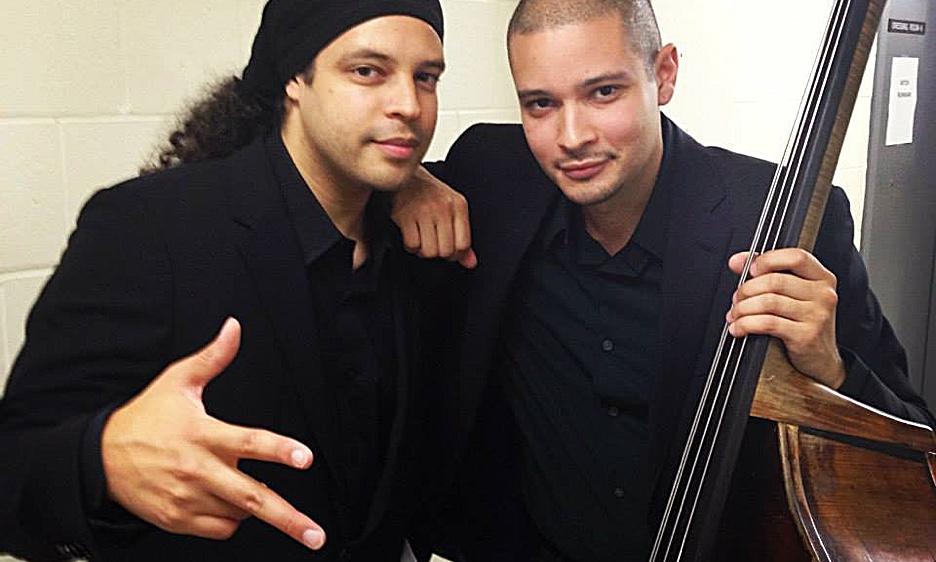 The Curtis Brothers are both generous and wise in choosing to render their musical vision with the men who have inspired and taught him. This is the mentoring system at its best.

Mentoring is one of the foundational elements of jazz culture; the elders teaching the young ones until the young ones are ready to establish their own identities and careers. This mentoring happens in a lot of ways. It happens by observing how an experienced jazz person dresses, carries him or herself, walks through a room, talks to an audience or handles him or herself on the bandstand. Of course, it happens by listening to the playing. In fact, when jazz people describe what it was like hearing someone play, they might say "they sounded great," but they will almost certainly say: "I learned a lot." A more direct communication might be established if the veteran thinks the young musician has potential and the two are personally simpatico. Musical information may be exchanged at a table in the nightclub and introductions proffered to other musicians. Then, the mentor might invite his protégé over to the house to practice or just to hang. The relationship bears full fruit when the elder invites the mentee to sit in at a gig, or even takes him on the road. As Luques Curtis wrote to me in an email:" The lessons I learned on the road were more life lessons. I learned how to behave respectfully and how to adapt to almost every musical situation by paying attention to how my mentors would deal with things.

Although it was billed as The Curtis Brothers at Scullers Jazz Club on Thursday, February 1, it was actually the Curtis Brothers and Mentors. Drummer Ralph Peterson, trumpeter Brian Lynch and alto saxophonist Donald Harrison had all taken the brothers under their wing at one point or another and helped make the next step in their careers and artistic growth possible. Zaccai Curtis, the piano-playing brother who did the talking at the club, made it clear every time he introduced a tune how important these veteran musicians have been to him and bass-playing brother Lugues Curtis. Thursday night's songs all fell under the umbrella of Zaccai's "Algorithm Suite," which was commissioned by Chamber Music America, New Jazz Works. Several of the songs played were dedicated to and written for the mentors. "Chief" was for Donald Harrison-who is Big Chief of the Congo Nation Afro-New Orleans Cultural Group. "The Professor" was for Brian Lynch-and one could see by the signaling he made throughout the evening that Lynch was making sure the brothers were doing right by the music. "Sensei" was for drummer Ralph Peterson who, Zaccai said, taught them how to play with a trio.

Although the names of some of the tunes evoked physics ("Parametrics," "Torus," "Algorithm"), and although there were some time signatures that were beyond my powers to decipher, the compositions basically fell in Latin and jazz musical territory. But, this wasn't a night of AABA, trade 4's and back to the head. The compositions were-through-composed. Each had several sections and when solos were taken, it was very pleasing to hear that any interesting rhythmic figures set out at the exposition continued to appear under the soloists. I was also pleased that after solos, they didn't simply return to the top and run through the tune, but had a different, composed ending. In the melodies (and the clave), there were overtones of Eddie Palmieri-who was cited as an important influence and I also heard the Afro-Cuban influence of Dizzy Gillespie and Chano Pozo, as well as mainstream jazz composer/arrangers like Freddie Hubbard and Oliver Nelson. Latin, modal and bop harmonies were intermingled and flowed easily.

The time-keeping by Peterson was pretty extraordinary. There was a quality to me of Indian drumming, which is to say, you wonder where he's going and where the time is-he dramatically stretches and pulls it-when all of a sudden-boom. There it is: almost shocking. There was fluidity to the group's time that one doesn't often hear. Peterson also had ample solo time. There were several tunes where the piano and bass did ostinatos-repeating figures-and let Peterson romp, which he did. The brothers were both strong soloists on piano and bass and Donald Harrison built up to some very intense climaxes in his solos. It was Brian Lynch, however, who was most remarkable to me. I'd heard him a few times before and, indeed, it was his name that drew me to this concert and he showed again why he is in the top rank of trumpet players. There seems to be nothing he can't do. Lynch has tremendous range, is able to articulate at very up tempos and is constantly inventive in his lines and the way he breaks up the rhythm.

Zaccai Curtis draws from a deep musical well to create his music-Latin, bop and modal harmonies, diverse beats and claves, ostinatos, stop times, odd meters and tempo changes. He is forging a distinctive voice and is both generous and wise in choosing to render his musical vision with the men who have inspired and taught him. This is the mentoring system at its best.