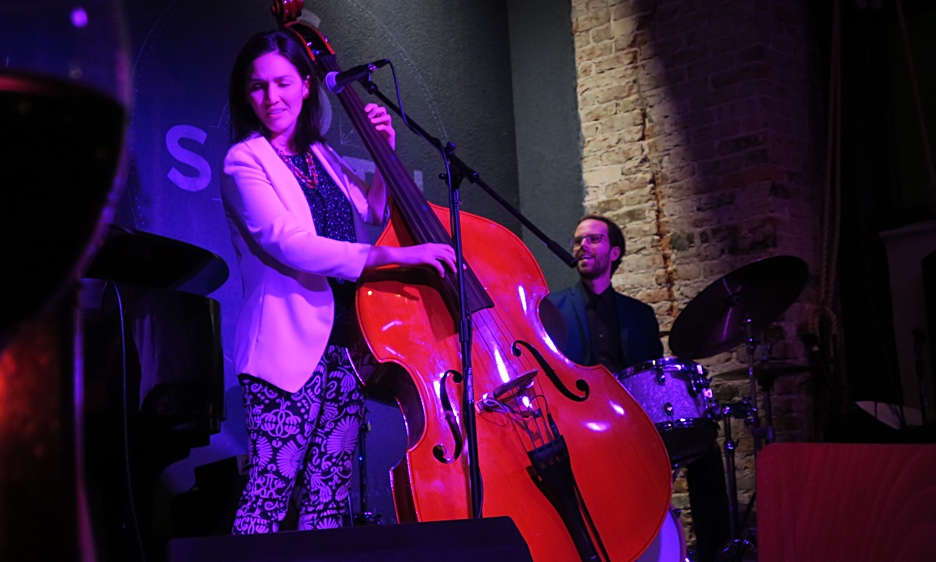 In time-honored Philly tradition, South is the kind of venue that recognizes jazz as a vital staple rather than just another aspect of business. Nestled on a corner in Center City's bustling north side (go figure), the place features a classy restaurant/bar that would make a fine dinner spot on its own, right alongside a sectioned-off parlor devoted to performances and regular jams. It has that classic club feel throughout, offering an invitingly urbane atmosphere and seating on the tight side of cozy.

Classy and cozy were also the name of the game for Katie Thiroux's first-ever visit to the city. It was a quick eastern jaunt from her home in Los Angeles, bringing along Matt Witek from her working quartet (as heard on the swinging Off Beat (Capri, 2017)) and meeting up with New York City-based pianist Glenn Zaleski. Even though they're not a steady band, the three share enough history and close friendship to make their chemistry terrific to watch.

"I always like to start with something really depressing," Thiroux explained with a winning smile after a jaunty "Just Friends" kicked things off. Zaleski's intro vamp gave the others a catchy bounce to play off until some tasteful scatting brought out the standard's 1930s origins with style. Thiroux has quite a charming voice and an expressiveness that makes a little note-bending go a long way. Her roots in jazz history are pretty strong—she's clearly studied the singing of classic divas and can never express enough admiration for Ray Brown—but even the oldest chestnuts remained fresh and timeless at heart.

Things calmed down for a smooth "When Lights Are Low" and a gentle bass/piano duet on Chet Baker's "Forgetful" where Zaleski again took an eloquent lead. Witek got his most prominent features when it was time to samba; each of the two sets included a slinky Latin piece where he dropped the sticks and grooved conga-style with his bare hands. He stayed keenly on target all night long, whether snapping crisp swing beats or brushing the cymbals for tasteful splashes of color.

The program touched on Sinatra with "When the Wind Was Green," Mercer and Kern in a jitterbuggy "I'm Old Fashioned," Duke Ellington for a sultry unplanned encore of "Just Squeeze Me," and slipped in a couple original tunes that brought out the trio's interplay most of all. In between there was still space for a beautifully rhythmic solo bass-and-voice reading on "Willow Weep for Me." Thiroux's sprightly work on the strings was always a joy, full of warm-toned lines that don't walk so much as skip and trot. The second set was over all too soon, but left the room full of big smiles all around (on stage as much as on the floor). Why should L.A. have so much of the fun? It was about time for Philadelphia to experience this blossoming talent in person, and may many more others get their chance soon enough.