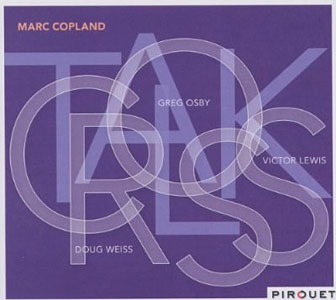 Pianist Marc Copland is widely admired for his harmonically astute writing, imaginative interpretations of standards, and sensitivity as a sophisticated soloist. The aesthetic foundation of Copland's expressionistic style can be traced to the poetic lyricism of Bill Evans and Keith Jarrett, and though the same could be said of many contemporary pianists, Copland's singular approach to the tradition sets him apart from his peers.

The German Pirouet label has been copiously documenting Copland's oeuvre since 2005; his burgeoning discography boasts numerous collaborations with mainstream luminaries like John Abercrombie, Dave Liebman, and Gary Peacock. The quartet featured on Crosstalk finds Copland reunited with alto saxophonist Greg Osby, last heard together on Night Call (Nagel-Heyer, 2004). Despite his reputation for cerebral complexity, Osby's proclivity for stark angles and vertiginous intervals never forgoes soulfulness, an aspect Copland excels at exploiting—especially on standards like the exuberantly swinging take on Gigi Gryce's "Minority" that closes the album. Osby and Copland's ruminative discourse on a re-harmonized version of the old standby "Tenderly" provides an apt demonstration of their sympathetic accord, balancing respect for tradition with a compulsion to expand conventional boundaries.

The date's refined ambience is enriched by the sterling contributions of tireless bassist Doug Weiss and legendary drummer Victor Lewis, who bring a simmering undercurrent of rhythmic vitality to Copland's impressionistic writing. Providing more than mere time-keeping duties, Weiss' pliant bass lines and Lewis' crisp in-the-pocket accents offer considered support bolstered by a conversational rapport. Their lilting swing on Lewis' "Hey, It's Me You're Talkin' To" finesses ebullient statements from Copland and Osby, whose blistering alto torrents on "Talkin' Blues" are provoked by the rhythm section's spirited tempo displacements, which also inspire some of Copland's strongest playing of the set.

Encompassing a nuanced array of moods, the session veers between the introspective musings of the resplendently ethereal "Slow Hand" and the jaunty interplay of Weiss' boppish "Ozz-Thetic," alternating between urbane lyricism and spontaneous invention. The understated funk of the title track encapsulates the best of both worlds, as Copland's effervescent voicings underscore Osby's oblique cadences, his cascading piano filigrees embellishing the tune's melodic contours with scintillating detail.

Copland and Osby's cogent exchanges are a revelation throughout the record. Whether probing the brooding depths of Osby's rubato ballad "Diary of the Same Dream" or sparring with unfettered glee on the altoist's labyrinthine "Three Four Civility," they elicit untapped potential; Copland coaxes sumptuous euphony from Osby, who prods the pianist deeper into vanguard territory. Aided by seasoned veterans who infuse his hearty romanticism with impulsive verve, Copland frames his luminous aesthetic in the context of a more earthy setting, making Crosstalk one of his most rewarding efforts.