Michel Reis: Point Of No Return 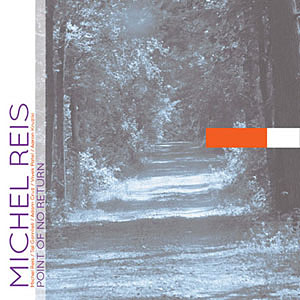 The trio on Michel Reis' Point Of No Return is a testament to the international character of jazz music, especially in the 21th century. A pianist/composer from Luxemburg, Reis studied jazz performance and composition at Berklee College of Music. Adam Cruz is a Latin American drummer, born in New York, whose experience includes playing with Chick Corea and Danilo Pérez. Bassist Tal Gamlieli is another amazing musician coming from Israel. The common ground here is the international language of jazz.

There's plenty of improvisation, and harmonic and rhythmic challenging moments: the tempo changes on the lullaby-like "Sailing Away At Night"; the moderate swing on "Street Of Memories"; Vivek Patel's thoughtful flugelhorn improvisations on "It's Only Been a Dream"; and Cruz's powerful drum solo on "Point Of No Return." But the emphasis is on Reis' smart, ingenious and well-constructed compositions.

Reis plays with a good sense of melody, mixed with sophisticated harmonic and rhythmic lines throughout—and, coming from Europe, his music is sometimes relaxing yet complex, and always creative, with a distinct European classical feel. The flugelhorn and soprano sax on "The Power of Beauty" adds to the orchestral feel of Reis' music.

With musicians and composers like this, there is no doubt that the future of jazz is in good hands.

The Power of Beauty; Folk Song; Sailing Away at Night; It's Only Been a Dream; Point of No Return; Riverside Drive; Street of Memories; Leaning Towards Tomorrow; The Sad Clown.