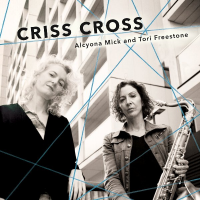 An associate of the Loop Collective, Alcyona Mick graduated in jazz piano from the Royal Academy of Music and Birmingham Conservatoire. She writes scores for silent films and is a member of the prestigious London Jazz Orchestra. Mick has recorded two albums with the jazz group Blink, including its eponymous debut album and its follow-up, Twice. Tori Freestone joined the National Youth Jazz Orchestra at 17 and went on to study jazz flute at Leeds College of Music, progressing to saxophone when she was 26. She's already recorded two critically acclaimed albums for Whirlwind, El Barranco (2016) and In The Chop House (2014).

The mesmeric "Hermetica" opens this set with Freestone on flute and guest vocalist Brigitte Beraha singing with unfettered vivacity, delivering wordless vocals to the haunting melody played in harmony with Freestone's flute. Soprano saxophone and piano exuberantly chase each other's lines around on the fast paced "Exchange." On the lengthy "Goodnight Computer" Freestone's searching exploration of the upper registers of the tenor saxophone is utterly compelling. The playfulness of "Mrs PC" —the jokey title an allusion to both Paul Chambers and John Coltrane—adopts a catchy, bluesy hook in a similar mood to Trane's Giant Steps version.

Thelonious Monk's angular title track soon evolves from the head to stretched out improvising with Freestone on tenor and a Monk-ish cadenza from Mick. The two then pick up the melody as a sprightly duet. "Press Gang" a traditional folk number arranged by Freestone, is sung by Beraha (her second and final contribution to the album) with typical mellifluousness. This is elegant, engaging and original music, played with magnificent panache.