By DAVID RICKERT
November 2, 2009
Sign in to view read count 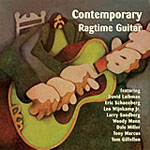 Most people's knowledge of ragtime doesn't go past a few classic Scott Joplin compositions, and practitioners of the style today (not to mention composers) are few and far between. However, there has always been a small cadre of guitarists devoted to playing traditional and original ragtime tunes, and most of them are quite good at adapting the highly syncopated musical form to an unlikely instrument. Contemporary Ragtime Guitar is one of the few compilations devoted entirely to ragtime guitar and, although the guitar may seem too limited to accommodate all the intricacies of a music developed on the piano, these musicians not only succeeded through inventiveness and determination, they also managed to breathe new life into the genre.

Contemporary Ragtime Guitar, originally released in the early 1970s, was the first record put out on Kicking Mule records by acoustic guitar practitioner Stefan Grossman, who found a large underground movement dedicated to ragtime guitar. This record compiles contributions from a handful of guitarists who have mastered the intricacies of syncopation and counterpoint that ragtime features. One look at the bewhiskered, long-haired fellows in the liner notes says these guys may spend more time wood-shedding than out in public; one listen to the CD provides a dazzling array of ragtime tunes of surprising diversity.

The liner notes don't tell whether or not the tunes featured here are originals but, with the exception of songs like "Maple Leaf Rag" which most everyone knows, all sound like fairly new compositions, so either the players are breathing new life into old chestnuts or are gifted at composing tunes in the idiom. Nothing sounds old timey; when played on guitar, ragtime shares a lot in common with other more familiar acoustic modes featured on other Guitar Workshop releases. As an added bonus for guitar players, several of the tracks are available as tablature in PDF files for study.

This music has been out of print for so long that it would be impossible to find on vinyl, but fortunately this terrific music is back in print and sounding better than ever. Complete Ragtime Guitar is one of the most hallowed artifacts of the finger-style guitar heyday.