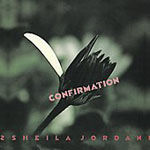 Sheila Jordan has the purity of heart of a child expressed through adult experience. When she dedicates this 1975 recording (originally on the Japanese East Wind label) to children of all ages, it is real.

Confirmation has songs written by Charlie Parker and Billie Holiday (her two greatest influences) nestled alongside offerings from American popular song (Richard Rodgers, Oscar Hammerstein, Jerome Kern, Frank Loesser, Arthur Dietz, and Richard Schwartz)—as well as pianist Steve Kuhn ("Pearlie's Swine, aka "The Zoo ) and something unexpected from Dr. Seuss ("Because We're Kids ). In lesser hands such a mélange of songs might be just a gimmick, but Jordan crafts her projects with care.

She possesses the uncanny ability to simultaneously explore the changes and tell a story. Parker praised her "million-dollar ears." Listen to "God Bless the Child, a masterpiece—second only to Holiday's original 1941 recording. Realizing that this is not a gospel song, but, rather, a plaintive jazz ballad of independence informed by pain, Jordan carries the sting on soaring, held tones that descend into smoky, melismatic phrases. Would-be "American Idols" could learn something about how to bend notes with restraint by listening to Jordan.

She honors Parker with "Confirmation, easily handling the light-hearted bebop lyrics written by her high school friend Skeeter Spight as she hones in on Bird's intricate melodic line and demanding harmonies. When she scats, she sounds like no one else, blowing a solo that is a marvel of concision.

In the ballad medley, she introduces another masterful performance with an up-tempo "By Myself," accompanied by Beaver Harris' intrepid drumming. This high-flying opening gives way to Kern's rueful "Why Was I Born. Here the lessons learned from Holiday become even more apparent. Although she sounds nothing like Lady Day, her willingness to go to the emotional ends of a song reveals a strong connection.

Every song on Confirmation defines the Sheila Jordan experience. To call this singer/musician merely a treasure or merely a great singer is insufficient to describe her enormous talent.

Introduction; God Bless the Child; My Favorite Things; Inch Worm; Because We're Kids; Confirmation; By Myself; Why Was I Born; Pearlie's Swine.