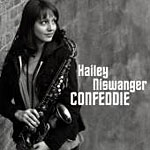 To look at Confeddie, the new self-produced record by Hailey Niswanger with an artfully posed black-and-white photo of the doe-eyed, comely saxophonist on the cover, the thought that may come to mind is "Great, another Candy Dulfer." Never judge a CD by its cover, to paraphrase some wise man (or, more likely, wise woman) lost to the mists of time. Barely 20 years old and currently attending the Berklee College of Music on a full scholarship, Niswanger and fellow students Michael Palma on piano, Greg Chaplin on bass, and Mark Whitfield Jr. on drums bring the goods on a program refreshingly free of the typical chestnuts and brimming with melodic invention, courtesy of the lass with the horn.

Niswanger pulls no punches, boldly starting things off with Thelonious Monk's "Four in One," a tricky tune that has tied the tongue of many a player. Not this altoist, however: the unison statements with Palma, who is excellent throughout, are perfect, and give way to an extensive solo that constantly touches back on the theme as it coils around it in a hundred variations. If Palma's solo were not hampered by Whitfield's overly fidgety drum work (what is this with young drummers these days doing the stop-and-start thing? It's rapidly becoming a nervous tic that spoils the swing), the take would be flawless.

A gorgeous essay of Herbie Hancock's "Oliloqui Valley" follows. Palma has room to stretch out, following which Niswanger unfurls a solo that exemplifies her gifts: a lovely tone, full and sharp but never shrill, absolute poise and a remarkable ability to spin out flowing melodic lines.

The title track is a Niswanger original, a blues written in the style of Eddie Harris (hence the name, a mash-up of "Eddie" and "confetti"), and it is truly unbelievable. If anything, it recalls John Coltrane as much as the electric Eddie himself, conjuring up the magic of the master's Atlantic period. Whitfield redeems himself here with some snappy solo breaks. Tunes by greats Kenny Dorham, Benny Golson, Wayne Shorter and Joe Henderson round out the sparkling set. The latter tune, "Serenity," contains an especially fine and swinging solo from the leader, but all are handled with aplomb, and recorded in wonderful sound by engineer Peter Kontrimas, who deserves a mention here.

It isn't every young student player who gets an approving profile in The Wall Street Journal by the sage Nat Hentoff, and it isn't every day that a record as joyful as Confeddie shows up.

Four in One; Oliloqui Valley; Confeddie; La Mesha; Sometime Ago; Serenity; Stablemates; Yes or No.