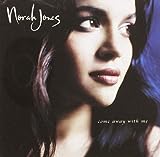 Convincing in her storytellin' role, Norah Jones sings popular ballads with an emphasis on the blues. Her delicate voice sparkles gently alongside the band's twangy guitar chorus and straightforward rhythm section. She accompanies on piano. The title song, resembling a spiritual, beckons the listener to waltz away with her to a place where life will be better: better than the tension-filled surroundings we face all too often. Her original, the song belies Jones' fragile persona and warm soul. Country ballads allow her natural innocence to shine through intimately. Employing multi-tracking, she blends consonant vocal harmonies to most of the tunes. Only a few veer away from the country music field. "I've Got to See You Again" stands out for its exciting syncopated rhythm and deeply romantic mood. It's a thrilling Latin affair that makes you want to tango. "Turn Me On" allows Jones to apply a tiny bit of vocal grit to an otherwise satin-smooth session. The album's musicianship is superb. Jones' "Nightingale" winds its way along country roads in a folk song setting. So does "The Long Day Is Over," which expresses the meaning of her lyrics quite well. Finally, she ends the album with a jazz standard. Paring it down to just voice and piano, Jones, 23, demonstrates a veteran's understanding of how to communicate with her audience. In her Blue Note debut, Jones is effective, intimate, and persuasive. She's got the world on a string.