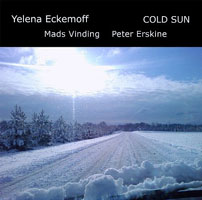 Pianist/composer Yelena Eckemoff works in that rarified area between modern classical chamber music and progressive jazz. Born and raised in Russia, Eckemoff attended the Moscow State Conservatory, where she studied concert piano and grew up in a strong classical foundation. She came to the United States before the collapse of the Soviet Union, and continues to compose and perform.

While many of her albums have tended towards a classical vein, Cold Sun provides an exploration of improvisation within the setup of the jazz piano trio. Built around a winter theme, the album finds the three players exploring a sparse, almost desolate sonic territory. What stands out most in these wide-open spaces is the tremendous chemistry between the musicians. With Danish bassist Mads Vinding and drummer Peter Erskine—two veterans who work with the best jazz company—the band communicates in a way that evokes an easy mood and the sounds of nature. The bass becomes the rhythm of feet falling in snow, while cymbals mimic breath or wind, and the piano traces a landscape from runs sloping up and down the keyboard.

The line between the melodies themselves and the improvisation is often hard to distinguish, but they're both clearly defined. Individual solos are fairly brief, and the result is that the nuances and personality of each musician shines out at almost any given point, lending tremendous nuance and tenderness. Eckemoff has both the ability to let a moment of silence stretch time between her phrases and the appreciation to let her sidemen ornament the quiet in their own way. Between laying rock solid grooves, Vinding often solos high up on the bass, imparting a sound like a pizzicato cello. And Erskine always seems to be doing something to build the atmosphere, as he drops ephemeral suggestions of time that shape without constraints.

Lovers of the great piano trios found on the ECM label (such as those led by pianists Bobo Stenson , Tord Gustavsen, and Marcin Wasilewski) will find a lot to like in this potentially overlooked self production. But so will anyone who enjoys relaxing music with some depth to it. It's music that goes well with good wine, firelight, or the sight of snow outside.