Jonathan Butler: Close To You 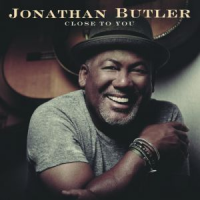 Dearly Beloved, Jonathan Butler having loudly—even hysterically, you might feel—proclaimed to the world that he has fallen in love with Jesus, let us consider his latest album and ponder Verse Two of "I'll Never Fall In Love Again" by Messrs. Hal David and Burt Bacharach:

What do you get when you kiss a girl? You get enough germs to catch pneumonia.

Surely anyone who can turn words like that into a smash hit must be blessed with genius, regardless of what you think of the rest of their oeuvre, which includes "Do You Know The Way To San Jose?" and "What The World Needs Now Is Love."

South African born singer/guitarist Butler revisits the David-Bacharach songbook for the bulk of Close To You, and also trots out his own "Cape Town," a decidedly ordinary eulogy to the place he calls home.

He returns to the David-Bacharach songbook for his final number, "A House Is Not A Home," which oozes sentimentality from every pore and which you might expect to have been rendered obsolete by such modern songs as Stephen Sondheim's "Live Alone And Like It" which laud the benefits of living alone.

Butler has a ready smile and a warm voice which allow him to get away with almost anything, though he wisely treats "I Say A Little Prayer" as an instrumental, apart from a little scatting, which gets him off the hook from singing about putting on his make-up.

All the same, it can feel strange on occasion hearing a man interpret a song like "Walk On By," which Dionne Warwick so much made her own.

Although in this age of gender bending, as Cole Porter would undoubtedly have said, had he not died in 1964: "Anything Goes."

Do You Know The Way To San Jose; I’ll Never Fall In Love Again; This Guy’s In Love With You; Alfie; I Say A Little Prayer; Walk On By; Close To You; The Look Of Love; Cape Town; What The World Needs Now Is Love; A House Is Not A Home.