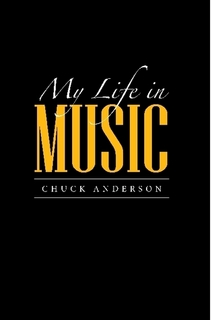 Chuck Anderson is not your ordinary jazz musician, and this book is not a typical biography of an entertainer or jazz artist. Anderson is a consummate master of the guitar in jazz, classical, and world music idioms, a composer, performer in diverse settings, educator, and leader of his own working trio. The book is not the typical reminiscence of hard times, successes, love life, the drug scene, and so forth. Rather it is a compendium of acquired wisdom about music, the guitar, and life placed in the context of a narrative of Anderson's life and extraordinary career. In informal, easy to read language spiced with gentle humor, Anderson tells stories of his five decades of experience in the music business, documents his accomplishments, provides fascinating insights into music, guitar, and education, and gives advice and guidance about how to pursue a musical career.

Anderson's career has followed a path much like that, for example, of his predecessors Johnny Smith and Joe Beck, spanning the gamut of work as a studio musician, a house band member at casinos and concert venues, a sought-after teacher, and a writer of commercial jingles, while at the same time devoting himself to serious composing and performing with his own groups. He made the difficult choice of staying close to his home base rather than taking frequent road trips, which traded off the possibility of fame and travel for dedication to the art form and a stable marriage and family life.

He is happy with the choice, and he wants you to know that a disciplined, financially and emotionally secure life in music is possible and satisfying. Maybe he overstates this point, for one senses between the lines some regret that he didn't achieve the recognition, legacy, and individual style that his friends and cohorts Pat Martino and Jimmy Bruno did by devoting themselves to developing their own unique voice and going wherever the gigs and record dates led them. Martino doggedly pursued his heart's desire from the very beginning, and Bruno dropped out of the commercial scene to pursue the jazz life at whatever cost. Anderson, who comes from a Chicago and Philadelphia Main Line family and got a thorough college education, deliberately chose, as he emphasizes in the book, to pursue music as a professional and business enterprise, while at the same time being a labor of love. It's no accident that this book comes out at a time when aspiring jazz musicians are increasingly taking the path of conservatory education, even including courses in marketing and public relations, as a means of survival.

Anderson took up the guitar almost by chance after someone dumped an unwanted instrument on him at a picnic. He soon discovered that he had a passionate interest and prodigious talent as a guitarist and, while in college, got work with local bands. While studying jazz with the great Dennis Sandole, he went against the latter's advice to focus on his individuality and took a job in the house band at the Latin Casino, a nightclub in New Jersey that featured top shelf entertainers like Bobby Darin, Peggy Lee, and Roger Williams where he proved himself adaptable to almost any situation and was very much appreciated by those around him. Later, he did similar work at the Valley Forge Music Fair, while devoting himself to teaching, composing, and studio work as well. He formed his own trio with bassist Al Stauffer and drummers Jimmy Paxon and subsequently Ray Deeley, developed a new approach to classical guitar using the electric instrument and plectrum, and recorded albums in jazz, classical, and world music genres.

Anderson suffered two crises that led him to confine his work to teaching. His Gibson L5 guitar was stolen, curtailing his career until Gibson created a new one for him, the customized L5 that he nicknamed the "Green Hornet." Later, he developed severe obstructive sleep apnea, which led him to be exhausted and fall asleep during work and driving, so he had to limit himself to teaching until he found effective treatment. Like the proverbial Phoenix, he twice rose from the ashes to new heights of his musical powers. In this respect, Anderson is a profile in courage and persistence, which gives the book an inspirational feeling and message.

But the real heart and uniqueness of the book is what Anderson tells us about life, music, and teaching. About life, he emphasizes the importance of relationships with family, friends, students, and musical cohorts. Far from being a creative loner, he enjoys people, relating warmly and humbly to his audiences and everyone he encounters, whether it be his 100 year old mother or the great Michel Legrand, who loved Anderson's playing so much that he asked him to jam with him after a concert gig. At the same time, he paradoxically demands the best from others, especially his students and his working trio with bassist Eric Schreiber, and drummer Ed Rick, but he has learned over time to take a more gentle approach. His idol, the great violinist Paganini, is not easy to match, and neither is Anderson, who reiterates throughout the book the importance of both self-discipline and relationships.

Anderson's insights into music are based in an organic holistic sense of music involving, body, mind, heart, and spirit. He shares important insights into cultivating rhythmic sensibility, an approach he calls "Modular Phonetic Rhythm" as distinct from forced metronomic accountability. He sees improvising as the heart of music, and he regrets that classical composers went from being great improvisers, like Bach and Mozart, to putting everything in score with little room for the performer's creativity. With regard to teaching, he wants to bring out what's in the student as potential, rather than imposing external expectations, norms, and adherence to rules, an approach he may have gotten from Sandole, who was a genius at developing the creativity of his students, guiding and inspiring jazz greats like Martino, John Coltrane, and James Moody, to name but a few.

This book is highly readable, although at times it becomes top-heavy with litanies of the top acts Anderson worked with and the details of his recordings, all of which may better be relegated to an appendix. What really grabs the reader are the stories of Anderson's encounters with the rich and famous as well as the average Jack and Jill and the philosophical reflections about what makes things really "tick," and, more than that, come alive in the moment. It's highly recommended that the reader take in a concert, recording, or music lesson by Anderson as an accompaniment to the book. His real credential is the sheer beauty, virtuosity, and mastery of his playing, which sets him well above the pack.