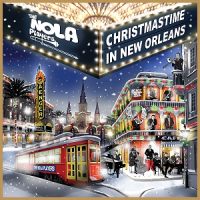 As valuable as the Marsalis family is to the New Orleans jazz community, their creative presence is so dense that most music made in NOLA will be drawn into their sonic orbit. This is not a bad thing, but neither is a little heterogeneity. This is what makes The NOLA Players' Christmastime in New Orleans such a joy, because of its ability to stand up to such holiday musical pinnacles as A Crescent City Christmas Card (Columbia, 1989), Christmas Jazz Jam (Compass, 2009), and Big Band Holidays (Blue Engine Records, 2015). A solid addition to the jazz holiday discography to be sure.

The NOLA Players is an 18-member ensemble made up of musicians spanning every musical genre. These are musician's musicians who might be playing with the Philharmonic on Thursday, a jazz piano trio on Friday and an R&B throw-down band Saturday Night. It is this depth of musical experience that sets Christmastime in New Orleans apart from other big band holiday recordings. Central to this unique sound is pianist Mike Esneault, who arranged the baker's dozen-plus-one selections here. His is a steady creative and performing hand, pulling together a diverse, independent band of master musicians. Esneault's arranging possesses more than a whiff of Basie while still retaining all that the NOLA environment has to offer.

Esneualt's charts are delightful. "Silver Bells" and "Deck the Halls" are given a full and intricate treatment. Unlike many similar recordings, this collection sounds like jazz. Each release from the melody into the solo sections pop both featuring full-throated tenor solos as well as Esneualt's fine soloing. The clarinet in "Deck the Halls" is slick and light. Listening to these first two pieces might make the listener wonder where the NOLA is in the playing. That thought is put to rest in "Christmas in New Orleans." An entire history of New Orleans music emerges in just over five minutes revealing a score that is both dramatic and compelling. Drummer Geoff Clapp drops holiday bombs left and right making this disc hard to listen to and walk at the same time. It is a Christmas strut.

"O Christmas Tree" is played with a pastoral delicacy featuring piano, clarinet and full horn section. Arranged to emerge slowly, the piece hits its stride a brisk mid-tempo. One can Imagine "I Heard the Bells" as imagined by Jelly Roll Morton and Sidney Bechet. After a brisk "Joy to the World," the band adds water to the scotch, opening its bouquet fully into an almost post bop romp pitting Esneualt's piano against Charlie Dennard's organ. Featured prominently is Jason Marsalis' fine percussion playing. This is the most fully realized of a group of fully realized songs. The juggernaut of the collection is a reverent and churchy "Go Tell it on the Mountain." It is pure joy...as the entire release is.

Silver Bells; Deck The Halls; Christmas In New Orleans; O Christmas Tree; I Heard The Bells; Joy To The World; I Saw Three Ships; Holly And Ivy; Jingle Bells; Away In A Manger; Silent Night; Go Tell It On The Mountain; God Rest Ye Merry Gentlemen; It Came Upon A Midnight Clear.

About The NOLA Players