By JOHN SHARPE
September 24, 2017
Sign in to view read count 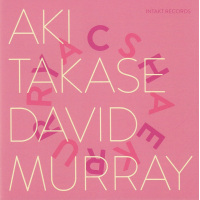 Twenty three years after their first studio date Blue Monk (Enja, 1993), Japanese pianist Aki Takase and American saxophonist David Murray reunite in Switzerland. There has been one live recording since, Valencia (Sound Hills, 1997), but the question remains what took them so long? The saxophone/piano axis has been a favored format for both. Murray's companions include Mal Waldron, John Hicks, Randy Weston and most frequently Dave Burrell, while Takase's partners encompass Rudi Mahall, Silke Eberhard, Louis Sclavis and Daniele D'Agaro. The attraction of the barebones set-up is obvious in the starkly lit stage and direct communication it affords.

The program of four by Takase, three by Murray and a lone interpretation of Monk contains a lovely mix of the bracing and the beautiful, which in a way sums up both their playing. Takase combines hints of tradition and modernity into a personal but appealing mélange. Murray displays a breathy full tone with just the occasional acerbic twist, deployed in a blend of dashes and suspensions which keep the listener guessing as to where he will end up. He also gives his accustomed control of the upper registers a thorough airing, though he does so in such a way that it enhances the emotional charge.

Half the pieces are tributes of one sort or another and they engender empathy by the barrel load. The ravishing title track gets the album off to a searing start, part mantra and part lament, before opening for Murray's tumbling tenor over Takase's rippling chords. Both take an unaccompanied break, Murray ascending into finely wrought falsetto, Takase edging towards dissonance, before a tender theme restatement which nonetheless takes some tangential liberties. That establishes the template, where the two take conventional roles, time and melody usually near at hand.

Of the other dedications, they swaddle Murray's "To A.P. Kern" in rich harmonies and murmuring Ben Webster-isms, while Takase's "Nobuko" is another gorgeous hymnal, bittersweet with traces of joy, in honor of her late mother and her "Blues For David" comes across as wryly affectionate. Elsewhere "A Very Long Letter" begins choppy and tense as Murray's agitated jostling cuts across the pianist's line, but after a bout of muscular piano introspection they end in jaunty unison. A similar breathless quality pervades "Stressology" where Murray hits the stratosphere. Perhaps unsurprisingly they are at their most playful on a sprightly "Let's Cool One," enlivened by Murray's insouciant bass clarinet. Two old hands in full command.