BY GENO THACKARA
March 6, 2019
Sign in to view read count 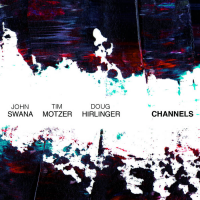 It's a jungle in here. The atmosphere is thick and close, even when things are still. Strange creatures keep flitting through the trees and rustling the bushes. The air never stays quiet for very long amidst the eerie calls of strange birds. The here in this case is a landscape that is imaginary, but that makes it no less vivid, exotic and just occasionally hair-raising.

The opening "Lost" makes being lost seem as fascinating as it is unnerving; John Swana begins with a light trumpet drone, then overdubs himself to weave two airy lines floating around each other with unhurried calm. Like the horn, Tim Motzer's guitar is less a conventional instrument than a tool for shaping odd and unexpected sounds. For his part, Doug Hirlinger's rhythms rarely settle into any noticeable pulse during this set, but most often shade things in with stray rattles and clatters. In these hands, the straightforward instrumentation becomes a palette to fill in their vast aural canvas with an array of light-handed strokes.

Swana's wavering micro-tonal drones show a clear connection to Jon Hassell's Fourth World Music philosophy and the minimalist side of electric Miles Davis; he doesn't really play notes so much as add light swirls to the trio's atmospherics (and is uncommonly skilled at making one note go a longer way than anyone would expect). When Hirlinger gets busier behind the kit, the droning turns into something tribal and hypnotic; the trance of "Caravan" becomes a full opium-den daze once Motzer's smoky echo fills the space, while the title track takes them to Africa with the sounds of thumb piano and log drums.

For the most part, the affair eschews form and structure entirely, abstractly sublimating feelings and moods into pure sound instead. Background electronics flit through "Out to Sea" like radio-wave static. "Ashes" is mournful and eerie, while shorter interludes like "Oasis" and "Suspension" tone down the gloom for some refreshing moments of serenity. It's a leap of faith that pays off in an immersive, detailed soundscape to surprise everyone involved. Whatever they're channeling here, it's something alluring and otherworldly.