The Interplay Jazz Orchestra: On The Sunny Side 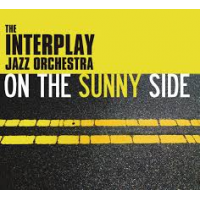 The third album from The Interplay Jazz Orchestra follows in its predecessors' footsteps, featuring all-original arrangements from musicians in the ranks and highlighting a deep and oft overlooked talent pool that, for the most part, rests east of the Big Apple. As on this group's previous dates, My Love You're Free (Self Produced, 2013) and Detour (Self Produced 2015), the music speaks to deep bonds and strong relationships built over a long expanse of time.

The band kicks hard right from the start here, opening on trumpeter and co-leader Gary Henderson's take on Joe Raposo's "Sing." This high-octane happening, powered by the rhythm tandem of bassist Dave Lobenstein and drummer Mark Portugal, packs a punch and puts rising star saxophonist Andrew Gould out front for good reason. His mighty chops accentuate the arrangement's bravado. A pair of tried-and-true jazz classics arranged by trombonist Joey Devassy, the outfit's other co-leader, follows. A shuffling "On The Sunny Side Of The Street" comes first and delivers more than its share of gifts—a sly stand from tenor saxophonist John Marshall, some rousing trumpet work from Damian Pacheco , tight section play from the reeds, and a pithy statement from Lobenstein. Then "Caravan" enters the picture, draped in funky attire that accentuates the song's sinuous curves. Devassy, Gould and Portugal each have their say before this scintillating desert journey is through.

The scales tip toward classics on this program, with smart takes on standards and Great American Songbook favorites outnumbering original compositions, but that's not to say there aren't some new additions to the repertoire here. Baritone saxophonist Chris Scarnato delivers a dose of uplift with "Renewed," Henderson deals in noir-ish themes on the rise with "Lights Down Low," and Devassy works two different angles, merging pathos and beauty on "Broken" and working debonair Latin designs on "El Gato Suave." With plenty of years under its belt, steady monthly gigs at two Long Island venues—Treme and The Jazz Loft— and a stable roster with some serious skills, The Interplay Jazz Orchestra has hit its stride.

Sing; On The Sunny Side Of The Street; Caravan; Renewed; Broken; Time After Time; Tangerine; Invitation; El Gato Suave; I'll Close My Eyes; Lights Down Low.

Title: On The Sunny Side | Year Released: 2019 | Record Label: Self Produced