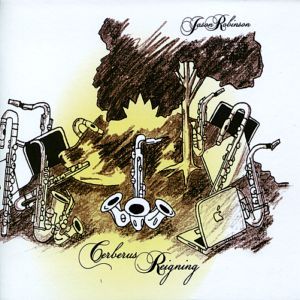 Cerberus Reigning is the second in a trilogy of recordings with Robinson exploring the intricacies of solo performance. A teacher at the Music Department at Amherst College, Robinson is first and foremost a fearlessly skilled instrumentalist. The opening salvo of "Broken Seals" is like a razor—cutting and artistically sharp in the vein of Eric Dolphy and Albert Ayler—before the software kicks in to create music that is otherworldly and machinelike.

There's both the weird and the wonderful here, as Robinson manipulates things in real-time. Splicing a horn solo here, looping a section there, and exchanging real sounds with processed ones, Robinson uses self-created software dubbed "Synchronous Aether," exhibiting artificial intelligence-like qualities that interact with his playing. Tracks such as "The Betrayal of Charon" contain enough theory and imagination to create sound-creations that are like settings in a science fiction novel.

Robinson's warm alto flute mixes with extraordinary designs in "Syrynx at the Edge of Nightfall" and "The Inner Wave," creating soothing oscillations, while there are unsettling processed noises in "Among Goliaths," where Robinson's horn sounds like an out of tune squeeze box, or bubbling liquid in "Rising Tide for Humanity." The title track and "The New Resistance Unveiled" are two of the most satisfying: the former bolting out, with Robinson soloing freely, before entering into a cool groove-loop and interesting sonic layers; the latter incorporating strange analog-synth sounds, but also feeling organic, as the acoustics of Robinson's tenor intermingles with the tech.

The lines between solo performance and experimentation are blurred and left to interpretation, but one thing is clear: Cerberus Reigning is a fascinating display of what an artist can do with a little creativity, true musicianship, and some technical ingenuity.