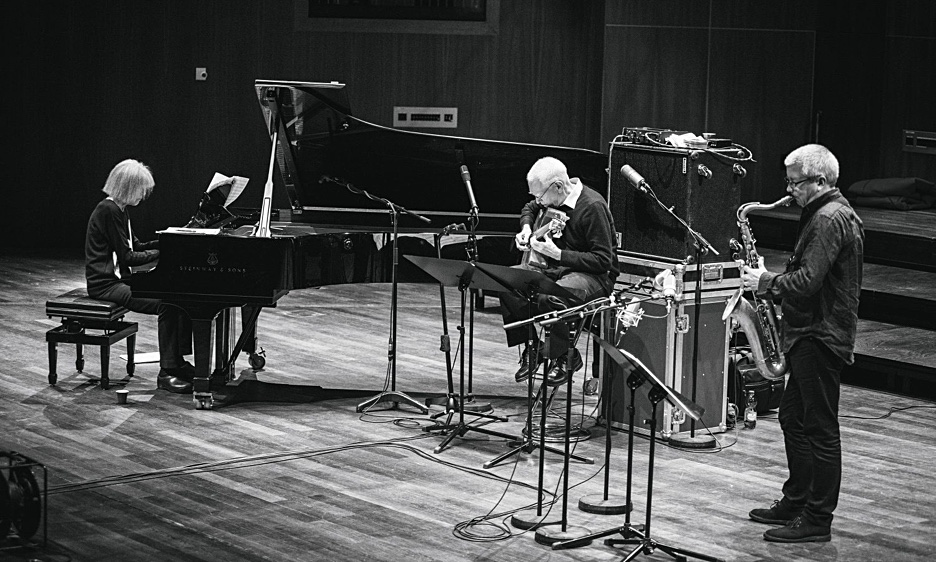 Pianist Carla Bley drew an equilateral triangle with electric bassist Steve Swallow and saxophonist Andy Sheppard at Dazzle Jazz in Denver. The trio showed the true meaning of democracy, unafraid to temper every glint of brightness with a hint of shadow. As within a handcrafted watch, each gear and spring worked in concert: remove one part and the whole mechanism would cease to keep time. Yet along with temporality, they were deeply aware of using space as fuel for expression. Sheppard flowed like wind through a keyhole, treating every finely wrought doorway as an opportunity to say something worthwhile. Swallow was the perpetuum mobile of it all while Bley oversaw every motif and mood like a mother proud of her children.

The newly-composed "Copycat" packed the roadbed for an evening paved with fair exchanges of the melancholy and the whimsical. As is typical of Bley's sonic milieu, she constantly shifted the tectonic plates beneath her melodies in a way that allowed her bandmates to hold on to each other at any given moment. The title could not have been more ironic, inimitable as Bley is. Another tripartite suite, "Wildlife," was the set's richest excursion. The exploratory antennae of "Horns" was followed by "Paws Without Claws," a groove from a band rarely concerned with grooves, its blissful lockstep as tightly woven as anything surrounding it. The playful "Sex With Birds" then found soprano saxophone and bass fluttering among swaying pianistic branches.

A handful of Bley originals rounded out the program. These included "Rut" and "Utviklingssang," both spotlights for Sheppard's uncanny ability to pull at thematic seams without upsetting the overall symmetry. The latter tune's selective altissimo gave his tenor that much more storytelling authority. The quirky brilliance of "Three Banana" was a special treat in a live setting.

The trio finished with a multicolored arrangement of Thelonious Monk's "Misterioso." Swallow was the fulcrum for two remarkable duo passages, one with Sheppard and the other with Bley, through which the band humbly proved its granular approach. Despite the fact that Swallow introduced the band by quipping, "Imagine what it would be like if you weren't here," one sensed that even in the absence of ears, their music would thrive simply by the appreciation of its existence.