Bud Shank: Never at a Standstill

Bud Shank has long been labeled as a cool or "West Coast Jazz" stylist, though the veteran alto saxophonist, now in his seventh decade as a performer, has long evolved past such labels. An alum of Charlie Barnet, Stan Kenton and Howard Rumsey's Lighthouse All Stars, Shank first began leading his own quartet during the '50s and recorded extensively for Pacific Jazz/World Pacific while also doing studio work. In the '70s, Shank formed the LA Four with Laurindo Almeida, Ray Brown and Shelly Manne. He has over 70 albums as a leader to his credit.

Shank grew up on an Ohio farm. "My father was in the Army Reserve between the two wars and got called up around 1938. We followed him, though we kept the farm. He had a ukulele that he got in WWI that he played three chords on. My mother played a little bit of piano. We always had a piano, but no one ever bothered to tune it. As soon as I got old enough to be aware of that, I couldn't stand to play it."

The musician discussed his formal education: "I was a clarinet major at the University of North Carolina-Chapel Hill. After a year, I realized that the music department wasn't teaching me to do a thing. They were prepping me to be a high school music teacher, symphony member or music store owner. They weren't giving me anything practical, so I changed my major to Business Administration my sophomore year and I quit altogether after my third year. I never did graduate. The smartest thing I did was to take all of those business courses. I applied that much more so than anything I learned in music. By the time I got to LA, I got serious about the flute."

While he first worked with Barnet, it was his tenure with Kenton that proved most valuable. "I learned more there than in any two year period of my life. Stan brought the best out of everybody. He encouraged everyone to write, though I never did for him. I was hired as the lead alto player, Art Pepper played all the solos. He finally realized that he had a first alto player who could play solos, which he had never had before. For a lot of the dances we did between 1950 and 1952, there were a lot of arrangements that I played things on, there are probably a lot of airchecks with me playing solos. But I didn't get to play any until later on when I came back to the band. That was traditional in those days. Stan was used to the format."

Shank arrived at the Lighthouse in 1953. "We did a lot of studying down there, it was another university. Coop [Bob Cooper] and I used to practice flute solos and compare compositions in the band room during the performance. In my own particular case, I always played improvisation by ear; I knew nothing at all about the theory of improv and chord changes. So I started studying with Shorty [Rogers], which did me a whole lot of good. I learned just the basics, but by the time I got into studio work, I could sight read chord changes and make a solo out of it as fast as I could sight read music, which is what they want in that business." 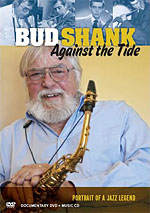 Bud Shank's playing has continued to progress throughout his long career. "I am not one to sit still, I could still play like I played in the '50s, but I don't want to. I just keep adding things on top of what I was always able to do. I kept my ears open during the strong part of the Coltrane era, though it probably doesn't sound like it. I think that's one of my duties, to help pick up the pieces of what happened in the '50s. That's when it all fell apart. We left a whole bunch of stuff back there. The Zoot Sims, Stan Getz and Al Cohn kind of thing, the big band era, etc. It has to be preserved and explored further before we can go ahead. Coltrane took us into some strange ways in the '60s and I don't think that the musicians were ready for it. It's going to take a long time for all that to be absorbed, used and come back out as something meaningful, but it is certainly very important. One of the things that had a lot to do with that was when I got rid of all of my flutes in the middle '80s, when I realized, 'What am I doing this for? That's not what I ever wanted to be. I wanted to be a saxophonist, so I threw them all away.' I explored the flute heavily, I got to play classical music, I made classical records. I got to associate with classical musicians, who didn't like me. They always kept telling me, 'If I only had the time, I could do anything that you could do,' which was nonsense. It helped a lot by getting rid of all that time spent practicing flute that I could be practicing the saxophone."