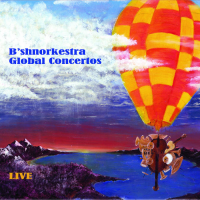 Jazz music has an eclectic relationship with the city of Seattle, from the Jackson Street days during and following prohibition, through the often brilliant scene today, the musical current has burned brightly in terms of innovation, and the freedom to express one's musical identity freely. Composer/trumpeter Samantha Boshnack seems then, a natural extension of this current of innovation and expressive magnetism that continues to spark the creative freedom this city inspires.

Since her arrival here from her native New York state, Boshnack has established wide acclaim for her work in quintet settings, as stated so strongly in her last album, Exploding Syndrome, or in a narrative setting, expressed in her brilliant, The Nellie Bly Project. With her chamber orchestra, B'shnorkestra, a fourteen piece collective formed in 2011, she has charted new territory moving forward on her musical journey, in the case of the ensemble's new album, Global Concertos, a journey spanning five continents.

As in the first B'shnorkestra recording, Go to Orange (Present Sounds, 2013), the ensemble brings together musicians from different musical communities in Seattle: jazz, avante-garde, rock, latin and classical. With Global Concertos, Boshnack pushes the envelope even further, by composing five distinct concertos, for five distinct soloists, from five musical continents, resulting in a work that can only be described as brilliant. Recorded live at the Langston Hughes Performing Arts Institute in Seattle, the integrity of the performance demanded it's release as an album, and a path leading to further explorations through the bold and uncompromising compositions of Samantha Boshnack.

Under the direction of Joshua Kohl, B'shnorkestra provides both compositional brilliance, and improvisational latitude, as is amply demonstrated in the first piece, "Prarthona," performed by Indian classical vocalist, Srivani Jade. Lyrically based on the poem by Rabindranath Tagore, Jade weaves modal expressions around Boshnack's hypnotic string arrangements, featuring deep, blue textures splashed across a canvas of music boldly striking forward without fear of baseless boundary. "Where the mind is without fear and the head is held high, where knowledge is free, where the world has not been broken up into fragments, by narrow domestic walls."

Tagore expresses a vision of a world not fragmented by prejudices based on caste, creed, color, religion, or baseless superstition. These notions of freedom and spiritual unity are beautifully expressed by Boshnack's modal transitions providing a musical landscape not "fragmented" by cultural bias. Between verses, and gradually throughout the piece, the mood spirals upwards, colors change, the musical fabric loosens and frees the remarkable instrument that is the voice of Ms. Jade. "Where words come out from the depth of truth, where tireless striving stretches its arms towards perfection. Where the clear stream of reason has not lost its way into the dreary desert sand of dead habit. Where the mind is led forward by thee, into ever-widening thought and action, into that heaven of freedom, my Father, let my country awake."

Tagore's cry for freedom is a notion present in all of human culture. In concert with the music of Boshnack, and the genius of Srivani Jade, Prarthona leaves the listener feeling a deep sense of spiritual and cultural clarity, as one might experience after a literal journey around the globe, yet experienced in nine transcendent minutes of music.

The album's second piece, "Concerto for Julio," was written for pianist Julio Jauregui, a master of latin jazz forms, born in Louisiana, and raised in Mexico City. He is acclaimed both as a pianist and musical director, and is well known for his work with Carlos Cascante y Tumbao. The piece explores Jauregui's percussive piano style, as it interplays throughout the piece with a more ethereal framework, and Latin, percussive base. Jauregui's improvised solo is a thing of beauty, clearly linking this piece to a theme expressed in all five concertos-that unique musical and cultural qualities have no boundaries of separation. An unyielding sense of hope and unity wanders seamlessly throughout this album, concerto to concerto, as is superbly expressed through this particular piece.

"Concerto for Christos" features Balkan musician Christos Govetas, born in Greek Macedonia, and remarkably, as is the case with all five soloists, now a resident of Seattle. Known for his work in the rebetiko form, Govetas is a master of Greek, Turkish and Arabic music, on a variety of instruments, including bouzouki, baglama, and oud. He garnered acclaim for his work on the album The Intercontinentals, with Bill Frisell, with whom he toured as well. Here he is featured on clarinet, his versatile, astute style cascades through the opening passages, evoking cross cultural images impossible to express in the finite world of words. Boshnack's blues infused sound is the perfect counterpoint for this master of a refugee subcultural form often referred to as Greek Blues, who transports himself into this arrangement, giving life to the unforeseen, mystical aesthetic of the piece. He composes and improvises his illusionary journey through sound, supported by a dark textural backdrop provided by bass and cello, weaving his way in concert with the bass clarinet of Kevin Nortness. This piece underscores the compositional talents of Boshnack, evoking images of new music compositions written for such ensembles as Kronos Quartet, and the clarinet mastery of David Krackauer. Her sound defines itself as distinctive and extraordinary.

"Concerto for Talking Drum" features African percussion master, Thione Diop, from Senegal, West Africa. Known for his powerfully expressive djembe performances, Diop descends from an ancestral line of Griot drummers from Senegal. From the outset, the piece reflects both western and African concepts, with a strong presence by Boshnack, and the saxophones of Kevin Nortness and Chris Credit. Boshnack's trumpet approach is powerfully representative of the blues/jazz tradition, leading into Diop's mesmerizing solo on talking drum. Again, the cultural lines are present, but not encumbering, not fragmented by cultural bias. Orchestral stretches fade into West African rhythms, and Diop's masterful solos, reemerging orchestrally into a modernist space, reminiscent of the works of such composers as John Adams, and Gabriel Prokofiev.

"Concerto for Jazz Trumpet," features Seattle native Thomas Marriott, one of the most exciting artists to emerge in jazz in the past decade. As a leader, Marriott has eleven albums to his credit on the Origin label, and has appeared on more than 100 as a sideman. I found it intriguing that Boshnack, a master trumpeter herself, would choose Marriott to perform this piece. Those familiar with Marriott's work, would not however, be surprised. His beautiful tone, specifically demonstrated through the long tones demanded by the composition, are a perfect, joyous match. Written in an elegant fashion, this is the true jazz piece of these concertos. In trying to draw a comparison to a noted composer, I am left without an answer pertaining to this music. I could sight the elegance of Ellington, the energy of Mingus, the eclectic musings of Bartok, I could refer to the beautiful soloing of Marriott, but I am left with two unique qualities. While many have compared Marriott's playing to Freddie Hubbard, or more recently, to Eddie Henderson, Thomas Marriott has a uniquely identifiable sound all his own. His tonality, choice of notes, and phrasing are immediately embraced by the listener, and recognized as being uniquely his. Indeed the same can be said for the compositional talents of Samantha Boshnack, whose work here is exciting, and important.