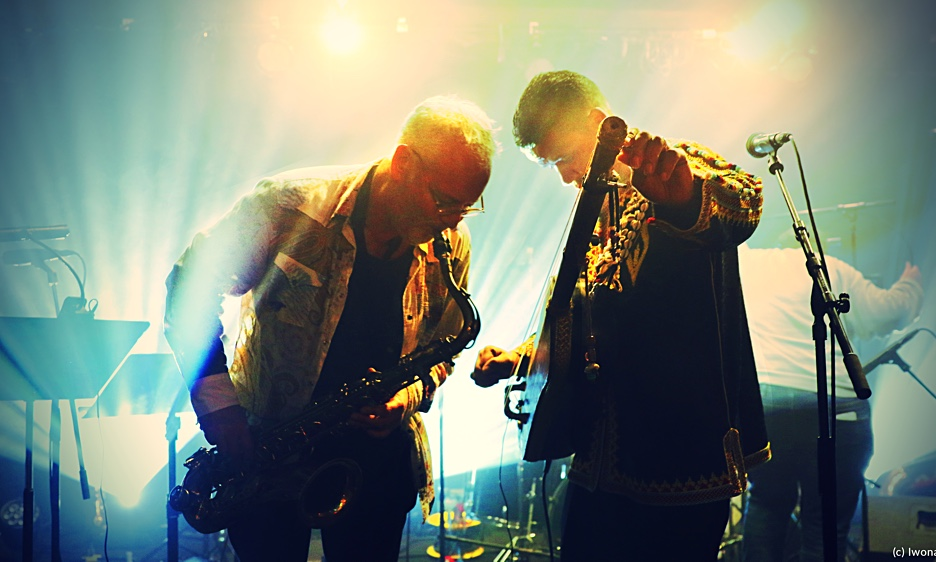 The annual Brussels Jazz Weekend fills up multiple venues across multiple zones, completely colonising this Belgian city with jazz, never asking for entrance fees, and even embracing other musical areas, such as global, roots, rock and electronica. It presents well over a hundred sets. Larger events revolved around open air stages (the spring weather was fine), but there were also a multitude of sets on offer in clubs, cafés, bars and other alternative joints. Rarely can we witness a music festival that creeps into as many urban corners as the BJW. It seems as though jazz has staged a coup of swirling, heady vibrations, imparting its non- metronome time on the regular, expected city geography.

Perversely (compared to some), your scribe elected to hang out at two themed nights, hosted by a pair of the city's leading music organisations. Each of these featured three acts apiece, negating the need to flit around from venue-to-venue. Not that such an approach would have caused any distress, as there's not much chance of any particular gig being rammed to capacity, given that there are so many choices available. The majority of BJW artists are Belgian, but the scene here is so sprawlingly impressive that standards are kept exceedingly high.

Muziekpublique is dedicated to a panoply of global ethnic roosty styles, and their home venue is the Molière Theatre, in Matongé, which is the African (mostly Congolese) microcosm within Brussels. Their Friday presentation was named, not surprisingly, Matongé Nights, and opened with a trio of Bao Sissoko (kora), Malick Pathé Sow (hoddu/guitar) and singer Moussa Niang, all of whom have Senegalese roots. The hoddu is similar to the ngoni, with a resonant banjoesque attack that doesn't impede fleet fingering prowess. This trio settled down for an acoustic session of reserved tranquility, but there was too much talking in-between tunes, and often a lack of flow to the proceedings.

The singing-and-dancing Tano followed, led by singer, dancer and choreographer Tister Ikomo, digging up Congolese roots. Tano lay at the other extreme: bold, slick and choreographed into an almost theatrical presentation, with a pair of fluid guitars for extra funk-excitement. Both of these acts played in the main theatre, and provided a wholesome show. Even if there were times when folks had to wait in the foyer before entry, most were ushered inside eventually, in paused groups. It wasn't so much a lack of seats, but a practical bottleneck.

The great highlight of the night arrived with what could almost be called the afterparty, as the bar-cum-entrance stage was used to host Super Rumba, a trio dedicated to the vintage soukous sounds of old Zaire. At least they started up as a guitar-bass-percussion threesome, but other members, whether 'official' or not, steadily expanded the ranks, as the momentum gathered, and the crowd squashed. It was a glory of traffic control, as there was still space for dancing in front of the stage, as well as a minnowing path towards the bar, as the audience clicked into a heaving, smiling, gyrating mob of natural communion-in-groove. Vocal harmonies interleaved, and guitar crescendos moved through sequenced levels of ecstasy, gaining greater height, just as we might have expected no further limit. The guitarist who looked like their grand master eventually receded in his role, allowing younger soloists to move forward, but the spangling remained undimmed, making this one of the most vibrant returns to classic Congolese dance music that your scribe has succumbed to for many a year. Such opportunities are lately becoming increasingly rare, as many old schools of Afro-pop are being submerged by old time and new tastes.

Saturday brought a similarly bountiful showcase evening from another crucial Brussels music organisation, Met-X, who promote gigs, release records and run community programmes, amongst other activities. Their orientation is for jazz that feeds into global-ethno traditions, or free improvisation explorations, frequently managing to merge groove and abstraction. The venue was Théâtre Marni, in the southern Ixelles part of town, a regular home to jazz performances.

The Ago! Benin Brass Band elected to play down on the floor, in front of the foyer stage used for this show, ideal for their horn-roaming and cavorting style of presentation. There's a larger, formal seated theatre in the venue, but this bar-zone was very suitable for the pulsating nature of this night. Some of their membership reside in Brussels, but the Ago! majority had just arrived from the West African land of Benin a few days earlier. They possessed a slithering informality, romping with exuberance, and loaded with four trumpets for heightened frazzle. The Met-X founder Luc Mishalle played tenor saxophone, and there were also three drums, one small and tubular, the other two being standard street-marching fare. It was difficult to fix the style, with its feedback between the Caribbean and New Orleans, as well as its old school jazzy jump, with an ongoing group flow of interconnecting solos. At one stage, Ago! almost went samba for a spell, forming a semi- circle, with members sliding towards the centre, for individual dance displays, such movement being a revealed secret weapon beyond their Sun Ra wildness. Extra horns, from the Met-X workshops, joined for a rousing finale.

Jolting shapes, the solo artist Esinam revealed a one-woman-band contrast to that merry troupe, operating her bank of sampling electronics, effects and small keyboards, grabbing different instruments to capture elements which built up songs spontaneously. Even if these tunes are proscribed, the details and outer layers are open to improvisation. Esinam is always trying out some fresh tweak of her core material. She loaded up flute over beats and basslines, processed like a funky Jon Hassell, or even The Brecker Brothers, in their late-1970s discovering-fx phase. She stacked up cowbell and mbira, with one number having a "My Jamaican Guy" aura, post-Grace Jones. Your scribe has caught Esinam's live set several times, and not previously registered a Laurie Anderson vibration, which was present during this set. There were also previously heard nods to Fela Kuti's keyboard stylings, and even aspects of John Surman's synth oscillations, which remain one of the most distinctive sounds in electronic music. She took "Birds Fly Under This Heavy Sky" on an extended journey, with vocals only entering after a good while of suspense-building. Esinam stores samples, then brings them back, when least expected..!

The walking band approach returned, but this time inhabiting the actual stage. Marockin' Brass is a well-established ensemble that spotlights the gnaoua traditions of Essaouira and beyond. The sintir of Driss Filali was central, flanked by a pair of qraquebs, Esinam on flute, Mishalle playing tenor and soprano saxophones, the spread also including trumpet, baritone saxophone, sousaphone, drums, and two of the largest bejewelled bendir frame drums ever witnessed (played by Badr Derras and Abdessamad Semlali). Once again, the music balanced multiple aspects (gnaoua, jazz, funk), showing the positive face of fusion, and providing a full-on ritual climax to this second great themed night during the Brussels Jazz Weekend.