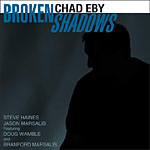 Attention grabbing music these days is either accomplished by the loudest voice (American Idol anybody?) or the rudest performance. While not saying jazz has descended to that level, certainly the squeakiest wheel often gets the most attention. Then again, hearing a genuine voice like saxophonist Chad Eby reaffirms the instinct that an authoritative performance from a rock steady musician need not be imprudent to get noticed.

This trio session, with bassist Steve Haines and drummer Jason Marsalis packs Eby's music aspirations from varying musical inspirations. Opening with Thad Jones' "Tip Top," Eby sports a soprano saxophone sound acquired from John Coltrane circa 1961. That unadorned sound, seemingly simple to the ear, reveals Eby's mastery of the very difficult straight horn. He returns to the soprano on his original "Little You," altering his tone, rejuvenating the sixties sound into a modern chamber feel and then morphing once again on his tribute to Steve Lacy on "Epitaph II: Line For Lackritz" with a more acerbic tone.

The "Epitaph Suite," four commissioned compositions, allows Eby to pay homage to Dewey Redman, Ray Charles, Jackie McLean and Lacy. Each piece displays a little of the honoree, but is more telling of Eby's sound. They can dribble an enticing blues for Charles, slowly defrosting a sexy tenor sound or cleanly snap off notes in praise to McLean without sounding derivative or clichéd.

Saxophonist Branford Marsalis joins Eby's trio on two tracks. The two tenors reprise Marsalis' duel with Joe Lovano on "The Sentinel," from The Dark Keys (Columbia, 1996); the two also interlock horns on the Redman tribute, "Epitaph I: Doo-We-Inn." Like Marsalis, Eby's tenor tone can be boundless, blues-inflected, and wholly satisfying. These two players are indeed simpatico.

For purists, the highlight of this session might be Eby's unaccompanied version of Duke Ellington's "The Single Petal Of A Rose." While not directly attributed to the late saxophonist Frank Morgan, Eby's patient and stoic rendering recalls the pain and beauty of Morgan's gentle persona. Bravo.

Tip Toe; Mira; Epitaph I:Doo-We-Inn (for Dewey Redman); Orange Was The Color Of Her Dress, The Blue Silk; Little You (for Spenser); Epitaph II: Line For Lackritz (for Stev Lacy); I'm Still Here; Sentinel; Broken Shadows; Sunset And The Mockingbird; Epitaph IV: J-Mac (for Jackie McLean); Epitaph III: The Kid From Albany (for Ray Charles); The Single Petal Of A Rose.