Buenos Aires International Jazz Festival '09 holds up its "international" status with outstanding groups from most all South American countries, as well as the United States, France and Spain. It's hard to imagine it could have done better in dealing with French cultural officials than by grabbing the Orchestra National de Jazz for the grand closing show of the six-day festival.

This cutting edge ten-piece orchestra, directed by Daniel Yvinec, with extraordinary and exhilarating arrangements by Alban Darche, presented a program called "Broadway In Satin," comprised of songs associated with Billie Holiday (2009 marked the 50th anniversary of her death). There are those in the music critic world who grow weary of people doing standards, feeling nothing fresh is applied to them anymore (not at all a position held by this writer). Well, this is the show for them.

The music—"I'm a Fool to Want You," "I'll Be Seeing You," "You've Changed," "Solitude," "God Bless the Child," "Skylark," and "Strange Fruit"—was utterly transformed, with sections that contained both group and individual free-form playing that could be associated with Archie Shepp or Pharoah Sanders. It was exciting, with unexpected twists and turns. Sometimes the listener couldn't predict what the song was or where it was going, but then there would be familiar signposts. That does not mean the music was confusing. It always held interest. It was tightly arranged with freedom in mind and each soloist was quite capable. The two singers—Karen Lanaud and Ian Siegal—with dissimilar styles added to the interest, and gave the arranger and director varied sonorities to utilize.

Yvinec told the huge audience at Buenos Aires' Teatro Coliseo the intent was "to start from what (Holiday) did and go to different places with different sounds."

The show kicked off with an offbeat electric bass solo, setting a somber mood. The tune came to light when Siegal, an Englishman whose forte is the blues, began intoning the lyric to Duke Ellington's "Solitude." He spoke the lyric more than singing, in a style that was Leonard Cohen meets Tom Waits. As the spacey music grew in volume, Siegal became more like Waits, circa Nighthawks at the Diner (Asylum Records, 1975). it's a natural style, bass voiced and slightly gravelly. Urban cool. The piano and rhythm section pushed the song into a wild but funky place, saxophones and flutes joining the barrage of sound that represented today, definitely not the 1950s. 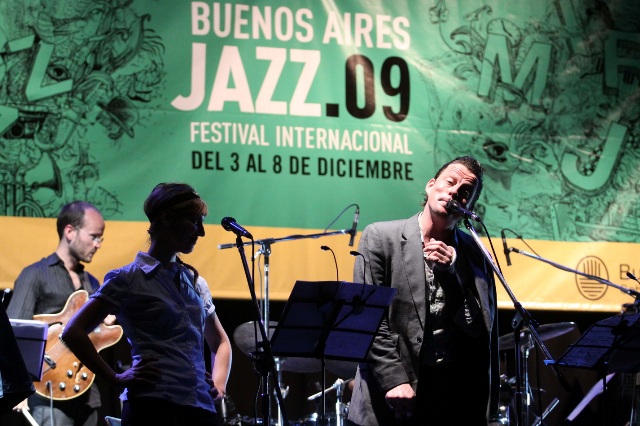 Lanaud sang "I'll Be Seeing You" in a clear, straight style, the horn players—all multi-instrumentalists— playing choppy phrases over an insistent rhythm. Siegal joined and the cacophony built up in a manner Sun Ra would be proud of before dovetailing back into the melody, with both singers taking it to its conclusion over boisterous horns.

Carmichael/Mercer's "Skylark" started with a thunderous drum solo (how often does that happen?) by Yohann Serra, a superb percussionist who was the backbone throughout with his polyrhythms and fleet switches in mood and style. As the band brayed out dissonant sounds, Lanaud began singing and the background quieted, giving way to a tasty mainstream guitar solo by Pierre Perchaud. "I'm a Fool To Want You" featured Joce Mienniel on bass flute going through the instrument's full range, overblowing, singing, soaring. The rhythm became repetitive and trance-like when Siegal slowly offered the verse in his deep, gravelly cool voice. He sings with a lot of balls, expressive and soulful. Rhythms got intense as the song was carried out. Great, innovative stuff.

"God Bless the Child" found Siegal in his Waits mode, his sound melding well over the shifting music of the adventurous band. It was followed by raucous, wild music over which Antonin-Tri Hoang played a free- form choppy alto solo that eventually transformed to a bebop thing. Serra and bassist Sylvain Daniel set a lightning tempo and the alto kept up, burning. But where was it going? It became "Strange Fruit" when Lanaud entered with the poignant lyric. Unexpected, but welcome.

This group, with all the instruments they play, and styles they cover, takes the music to a new, modern place without losing its original meaning. It's out front. Not your mother's Billie Holiday songbook. But the territory it claims is striking.

The Orchestra National de Jazz is a brash, bold, young avant-garde group that takes chances and doesn't sit still. The show was compelling. Great work by festival artistic director Adrian Iaies in presenting this organization. Are there U.S. producers out there who could do the same?