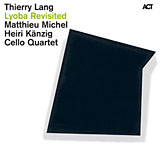 New sources of inspiration can sometimes be no farther away than your own backyard. Coming from Fribourg—a small, beautifully preserved old town in the west of Switzerland—the classically trained and jazz-savvy pianist Thierry Lang has long been drawn to area's endemic music, in particular that of Joseph Bovet, a priest who lived in the area from 1879 to 1951. Bovet's music for male choir reflects an unmistakable Alpine flavor, a cinematic openness redolent of mountain vistas and lazy rivers. Lang has already released two albums independently—Lyoba (Cully, 2007) and Lyoba 2 (Neue Volksmusik, 2008), the title referring to ritualized singing used by farmers to collect cattle. Lyoba Revisited rerecords some of the best music from both discs, music that's as elegant as it is gentile.

Lang's core trio, with bassist Heiri Känzig and flugelhornist Matthieu Michel, isn't especially unique in the realm of chamber jazz, but the addition of a four-cello section certainly is. Rather than the broader range of a string quartet with violins, viola and cello, Lang's cello section adds a warmer, midrange richness to his arrangements of 11 compositions—seven by, two by the priest's contemporary, Pierre Kaelin, and two by Lang— that the pianist calls Swiss standards; folk songs familiar to the Swiss that are clearly spiritual in nature.

Kaelin's "Adyu mon bi payi" begins with a melancholic cello melody, but when the trio enters—with Känzig creating some simple percussion on the body of his bass—it morphs into a dark, modal vamp. With Michel's muted flugelhorn and Lang's abstract chords, it could easily be a folkloric extrapolation of Miles Davis' classic In a Silent Way (Columbia, 1969)—no surprise, given that its title track was written by Joe Zawinul, a native of Switzerland's eastern neighbor, Austria.

Elsewhere, it's easy to imagine Lang's arrangement of Bovet's L'Immortelle de Jean" for a male choir, though here, the cellos create a more lush and eminently lyrical introduction. Michel's delivers his most poignant solo of the set over the hushed rhythm of the composition's middle section. Lang, too, focuses on extending Bovet's naturally singable lines into an improvisation of solid construction and delicate touch, while Känzig's spare melodism and woody tone reference Charlie Haden's duet work with British pianist John Taylor.

There are hints of swing throughout, and while there's no drummer to firmly define it, songs like the more bouyant "Le vieux chalet" feel as much in the jazz tradition as that of the Swiss. Lang and Michel orbit around each other, trading composed melodies and improvised lines in a seamless confirmation of this group's shared simpatico, developed over the past three years.

An album of refined beauty, Lyoba Revisited confirms the undeniable place for traditional music from foreign cultures in contemporary jazz—expanding, rather than diluting, the music's long tradition of incorporating outside elements.