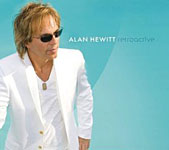 The CD artwork to Alan Hewitt's Retroactive looks like a reproduction from the old TV series, Miami Vice. Hewitt is dressed in a white suit with V-neck T-shirt, shades and shoulder-length blond hair. As a pianist and smooth jazz keyboardist, he travels on a flashback journey in both his attire and music.

Hewitt opens the recording with the title track from Shaft (1970), scored by the legendary Isaac Hayes. The pianist's rejuvenated arrangement rides parallel to the original Hayes score, except that his keyboard takes the place of Isaac's solo voice. It's a comfortable listen that brings back pleasant memories of a bygone era by encapsulating the zeitgeist. Hewitt's "All of You" utilizes a memorable melodic hook that's dangerously close to the 1970's Rolls Royce hit record "I'm Wishing On A Star," but he puts his own stamp on it —catchy and, after the first few notes, completely original. The title track is funky, followed by an arrangement of Sly Stone's "Hot Fun in the Summertime," with soulful vocalist Shea Chambers sweetening the pot.

Clearly Hewitt has the ability to cross musical genres, splicing smooth jazz with funk, and injecting strong R&B grooves. He maintains an easy balance between pop music, soul and jazz on "In The Works." A touch of Steve Madaio's soulful trumpet (revealed in the press sheet to be one of Stevie Wonder prominent sidemen), adds a Straight-ahead flavor to the mix. Hewitt's "Amagine That" features the leader on piano, drums and vibes, winding and twisting the tempos like a masterful New York taxi driver.

Hewitt has worked as a writer, producer and pianist with some of the best in the music business including Tower of Power's Greg Adams, who makes a guest appearance on "Nassau Blue." Hewitt has worked extensively with Earth, Wind & Fire, Warrant, and Donny Osmond, and is a favored composer for the Oprah Winfrey Show, including Oprah's "Big Give." With his unique stamp of talent recorded on over 12 million sold records, and as a first call producer for major film and television productions, it's no wonder this CD is hypnotic, toe-tapping, nostalgic and definitely radio-friendly.

Shaft; All For You; Retroactive; Nassau Blue; Hot Fun In The Summertime; In The Works; Saturday Afternoon; Amagine That; Big Bang; H2O.

Dee Dee McNeil is a published songwriter/poet/playwright and freelance journalist.