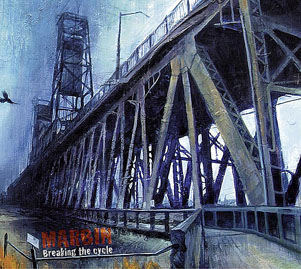 At its jazz-rock core, Marbin is the Israeli duo of guitarist Dani Rabin and saxophonist Danny Markovitch, sort of a Israeli version of Walter Becker and Donald Fagen, the essence of Steely Dan. Bassist Steve Rodby and drummer Paul Wertico, who cumulatively won 18 Grammy Awards as members of the Pat Metheny Group, provide the rhythm support for Marbin's second album and MoonJune debut; Wertico herewith returns the favor of Marbin's melodic contributions to the drummer's 2009 release Impressions of a City (Chicago Sessions).

The windy, electric "Loopy" melody bursts open with all the bright, hot splendor of the morning's glory: guitar screams like a siren, then shimmers in background chords while saxophone sings in its wake, and the drum/percussion section downpours and thunders. Markovitch's clarinet sound and fluttering attack on saxophone, plus its accompanying rhythm, help "A Serious Man" sing a song of jazz fusion that's rooted in, but branches out beyond, Israel. The weighty "October Revolution" sounds and feels the same way.

"Bar Stomp" would sound at home in blues joints the world over, too, with Rabin's guitar rampaging in electric mayhem and moaning like a worn out delta bluesman. In a nice bit of sequencing, it's preceded by "Mom's Song," a tiny but no less splendid reflection of gratitude so profound that it cannot be spoken, with the poignant wistfulness in the saxophone melody underlined by Leslie Beukelman's wordless vocal.

Viewed from different shores, "Western Sky," "Claire's Indigo" and the pastoral waltz "Snufkin," color complementary pastel vignettes of softly evocative, mainstream jazz Americana. But "The Old Silhouette" paints this set's most striking musical portrait with saxophone lines that swoop and dovetail in an intricate rhythmic dance against a percussive backdrop that softly pulses and clatters, the set's most vibrant mixture of acoustic and electric music.

"Burning Match" is more directly inspired by an Israeli melody, serpentine music so thick with sensuality that you can nearly taste it, ringing in a carnal yet holy tone which seems to span and then transcend its regional styles into a global jazz sound.